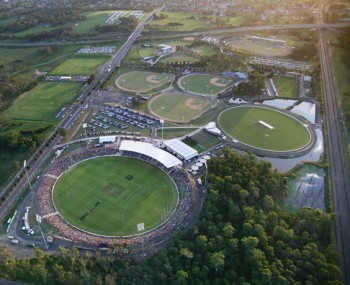 The Blacktown International Sportspark (BISP) has enjoyed another successful year with over 500,000 participants, spectators and visitors enjoying the venue's events and facilities in the 2012/13 year.

Commenting on the venue's 2012/13 performance, Blacktown Venue Management Chief Executive Kevin Jones stated "2012/13 has provided Blacktown International Sportspark with another amazing year which saw our visitation reach just under 550,000 for the first time."

In addition, the venue played host to over 4,000 events.

Making further on the venue's performance in a letter to stakeholders, Jones added "with the Olympic legacy venues of baseball, softball and athletics now an important and integral part of the western Sydney sporting landscape, Blacktown is proud to support these sports and for the sports we have welcomed to our great sporting community since the year 2000 the International Goalkeepers Academy, Western Sydney Wanderers, AFL NSW/ACT and Cricket NSW.

"The support of the NSW Government has been crucial to the establishment of BISP as a sporting hub and ... it is partners such as the NSW Government and our sporting stakeholders that have helperd make Blacktown International Sportspark 'the heart of sport in Western Sydney'."

It should be stressed that no funding commitments for the Blacktown International Sportspark were eventually made during the recent Australian Federal election.

For more information go to www.blacktownsportspark.com.au/Home