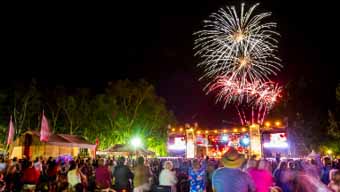 After 10 massive days, the Toyota Country Music Festival Tamworth 2015 closed on Sunday (25th January), finishing in style with a show from US Country Superstar Kenny Rogers, and a high energy evening in Toyota Park (Bicentennial Park) for the closing concert.

Over 50,000 people, thousands of shows, and a remarkable amazing array of sounds and styles lit up Tamworth during the Festival, acclaimed as one of the best ever.

Now in its 43rd year, the Toyota Country Music Festival Tamworth is much more than just country music, with a range of different events that appealed to festival-goers young and old.

Festival Director John Sommerlad said that this year’s Festival was one of the most exciting and diverse in its history.

Sommerland explained "the calibre and breadth of established and emerging musical talent on show at Tamworth this year from Jared Porter, to Kasey Chambers, right up to international country superstar Kenny Rogers is as unique as it is overwhelmingly good.”

The Opening Concert kicked off the festival in style with Country Music icon Kasey Chambers headlining the free concert in Toyota Park. The fireworks went off and the festivities were officially in full swing.

The Roll of Renown acquired two new members, with legends Ray Kernaghan and his son Lee Kernaghan being inducted, and having their plaques affixed to the granite boulders outside Tamworth Regional Entertainment Conference Centre (TRECC).

Paul Kelly came by with his Merri Souls, playing songs both old and new in front of a sell-out crowd at TRECC.

The Galaxy of Stars has a new member, with six-time Golden Guitar winner Melinda Schneider being inducted to recognise her outstanding achievements in Country Music. Schneider was inducted in a special ceremony that took place on the Fanzone Stage on Peel St.

The Toyota Star Maker competition was as fierce as ever, with an array of talented hopefuls turning out to battle it out, with Mickey Pye taking home the grand prize in the 36th annual competition.

Fans were also able to get close to their favourite stars, in the ever popular Toyota Fanzone. Crowds showed up for special performances and signings with fan favourites The McClymonts, Viper Creek Band, and Mustered Courage all taking the stage.

The annual Cavalcade was a spectacular sight as it rolled down Peel St, dazzling crowds with a procession of sights and sounds. Tamworth City Dance Academy took home the prize for Best Commercial entrant; with Best Non-Commercial entrant going to Tamworth RSL Sub Branch.

The final day saw Kenny Rogers take the stage as part of his Farewell Down Under tour, his last visit to Australia. The 76 year old industry legend thrilled crowds playing a string of his best loved hits.

The Closing Concert saw thousands turn out in Toyota Park for a massive final night of songs and sing-a-longs. Christie Lamb, and Adam Eckersley Band, formed a massive line-up topped off by surprise headliners McAlister Kemp.

The traditional closing fireworks were a hit also; bringing to a close another highly successful Tamworth Country Music Festival.

With thousands of events held across 10 days, attracting over 50,000 visitors from across Australia and the world, and doubling Tamworth’s population; the Toyota Country Music Festival Tamworth is not only the biggest music festival in southern hemisphere, it is the unsurpassed home of country music in Australia.

The Toyota Country Music Festival Tamworth 2016 is scheduled to run from Friday 15th to Sunday 24th January next year.