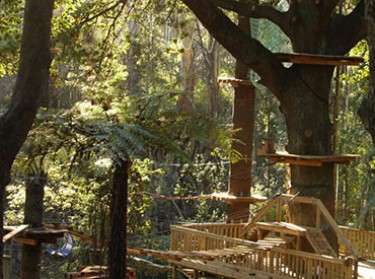 A tree-climbing course in Tasmania's Mount Field National Park, a surfing centre at South Arm and 40-bed boat cruising the Gordon River are among the latest group of tourism proposals likely to be approved by the Tasmanian Government.

Tasmanian National Parks Minister, Matthew Groom, has given preliminary approval  for 13 tourism projects to proceed to the next stage of Tasmania's new assessment framework for developments proposed for national parks.

Minister Groom confirmed last week that five projects had been approved to proceed to a more rigorous assessment process, and has now added a further eight.

A total of 37 ideas were submitted, but it is understood 11 of those have not met key standards.

Minister Groom stressed the assessment process for tourism developments was rigorous, and in a statement said any project approved would be "sensitive and appropriate".

Entreprenuer Nicolas Dansin is the proponent of one of the projects that has been approved to proceed to the final assessment stage.

Melbourne-based Dansin heard about the Tasmanian Government's bid to foster commercial developments in national parks last year, and submitted a proposal to develop up to eight tree-top climbing courses in the Mount Field National Park, on the eastern edge of Tasmania's Wilderness World Heritage Area.

Dansin, the co-Founder and Director at Trees Adventure, told the ABC “we came for a visit late last year, and I fell in love with the site.

"We found a little place near a little river with magnificent mountain ash and other big trees right there.

"We could develop zip-lines, a flying fox, but it could also be a timber bridge, a cargo net that you have to try to cross, a trapeze that you have to swing with - all types of obstacles, and for different levels."

Dansin's company, Trees Adventure, already runs one tree-climbing course in Victoria and two in NSW. He esstimates setting up a fourth in Tasmania's Mount Field National Park would probably cost up to $500,000 and stresses his proposal will have a minimal environmental impact.

Dansin added “we build everything by hand, everything is cut in the warehouse so there's no machinery, and the impact on the trees is very limited - we're only compressing the trees.

"When the tree is tired or suffering from the installation, we would decommission the tree from the course and redesign the course so the tree can keep growing normally."

It has proposed a 45-metre purpose-built steel and glass vessel to operate in the lower Gordon River, in the Franklin-Gordon Wild Rivers National Park.

The vessel would sleep 40 and include a restaurant, interpretation centre, and would be able to carry equipment for kayaking on the river.

Minister Groom is apparently aiming to complete the current stage of assessments by 13th March.

For more information on Trees Adventure go to www.treesadventure.com.au