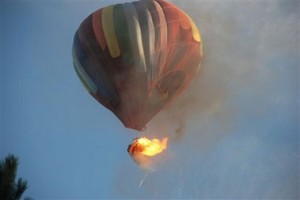 11 deaths have been confirmed following the crash of a hot air balloon this morning at Clareville, in New Zealand's Wairarapa region.

Witnessed report that the balloon caught fire after it clipped a power line, then crashed to earth in farmland at around 7.30am this morning (Saturday 7th January).

The pilot and 10 passengers onboard did not survive.

Police and emergency attended the scene having been alerted to the incident by telephone calls from local residents.

Commenting on the incident, Wellington District Commander Superintendent Mike Rusbatch stated "this is an absolutely tragic incident and our thoughts are with the families of the deceased. We are in the process of notifying next of kin however we will not be releasing any names until all next of kin have been advised."

Superintendent Rusbatch explained that a disaster victim identification team will identify the bodies, adding "we also have a number of Police staff who are working with the families of the deceased to provide them with the support they need at this very difficult time."

Police are working with a number of agencies including the Fire Service, the Coroner's office, the Transport Accident and Investigation Commission, Civil Aviation Authority and the Department of Labour, to investigate what led to this incident.

The New Zealand Herald reports that Ballooning NZ Director Lance Hopping is thought to be the owner of the hot air balloon, although it is not known if he was on board the flight. Hopping apparently has over 1,000 hours of commercial ballooning experience.

New Zealand's Transport Accident Investigation Commission has opened an inquiry into the incident with an investigation team being assembled.

The Commission conducts safety focused investigations with the aim of being able to explain the causes of an accident, so that lessons and recommendations can be drawn in order to help reduce the likelihood of a similar event in the future.

Wairarapa is a popular hot air ballooning destination where the annual Balloons Over Wairarapa festival is held in March.