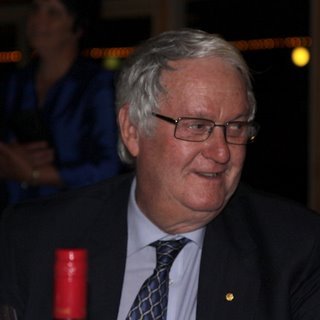 Former National Council of YMCA’s Executive Director and Chairperson of both Sport and Recreation Training Australia and the Recreation Industry Council of Australia Bob Romanes has been honoured by Aquatics & Recreation Victoria (ARV) for his lifetime contribution to the industry.

Presented at the 15th annual ARV Industry Awards gala on Friday 12th June, Romanes (pictured) was presented with the ARV’s Award for Most Outstanding Contribution to Aquatic and Recreation Industry.

The Awards were attended by Victorian Minister for Sport, John Eren, who announced a $400,000 funding package for VICSWIM in 2015/16 during the event.

Held at Central Pier, Docklands, the night saw the presentation of 18 separate awards, with winners having been judged from 117 nominations by a panel of 53 judges – each experts in their field.

With a ‘Hollywood’ theme, the night included an evening of live entertainment and dancing.

Images from the Awards can be viewed at www.aquaticsandrecreation.org.au/Events/394/2015ARVAWARDSWINNERS.html