A new research report shows that tourism is a significant employer in key electorates that will determine the 2017 Western Australian Election. 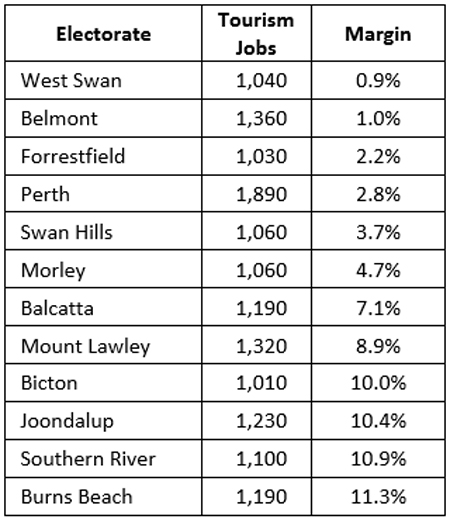 Tourism Council WA Chief Executive Evan Hall said the research showed tourism creates local jobs across metropolitan Perth and regional Western Australia, stating “while tourism jobs are located in the heart of Perth, most of the workers live and vote in the battlefield suburban electorates that surround the city.

“Other industries, such as manufacturing, create jobs concentrated in specific areas, whereas the Tourism Work Atlas shows tourism creates local jobs across a large number of electorates in WA.

“Tourism is shaping up as a key election issue as voters start asking where new jobs are coming from.”

Hall said WA Labor had already committed to increased investment and consistent funding of $85 million each year to promote the state as a visitor destination.

He added “the Premier has already taken on the tourism portfolio and the industry is keen to see the Government’s policies in the run up to the state election.”

TCWA has also launched a specific website, Tourism Works, highlighting the benefits of tourism. View the website at www.tourismworks.com.au