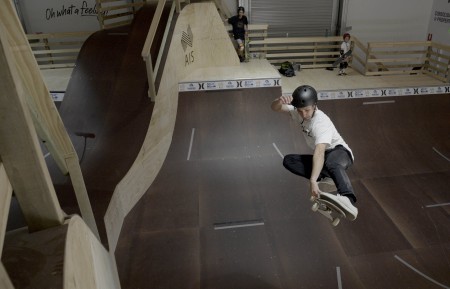 Australia’s elite surfers are now able to hone their aerial skills before hitting the waves with the opening of the Australian Institute of Sport Aerial Surf Skate Training Facility at the Surfing Australia High Performance Centre at Casuarina on the NSW North Coast.

The indoor skate park is an exciting new addition to the High Performance Centre (HPC), featuring a large split level half pipe and two roll-in elements that lead into matching sections that simulate the shape of a wave to provide the rider with a launch pad to take to the air before landing safely on air bags below.

The new facility will provide elite Australian surfers with the opportunity to practice aerial manoeuvres in a controlled environment by training on a purpose built skate ramp with coaches and athletes pushing performance boundaries and ultimately defining the future of the sport.

Speaking at the official opening of the facility, new Surfing Australia Chair and seven-time World Champion Layne Beachley (pictured below) stated “this was not going on in my day … In the late 1980s when I was put through high-performance coaching it was down at Lennox Heads in a couple of demountables.” 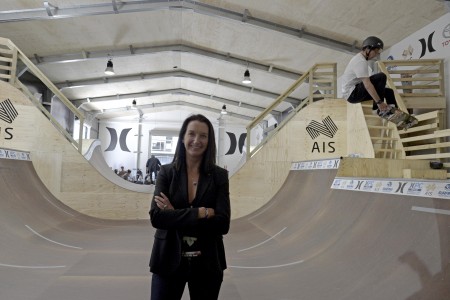 The Australian Institute of Sport (AIS) invested in the project through the new AIS Competitive Innovation Fund (CIF) which was established to encourage innovation in high performance sport, including sport-specific projects and technology initiatives.

AIS Director Matt Favier said Surfing Australia ticked all the boxes when it came to assessing projects for funding under the CIF, stating “this project is all about being innovative and thinking outside the square on the best ways to improve the performance of our nation’s premier surfers and keep them among the world’s best.

“Activating with the opening of the facility, the Skate to Create project will provide elite Australian surfers with the opportunity to practice aerial manoeuvres in a controlled environment by training on a purpose-built skate ramp.

“The project will see coaches and athletes pushing performance boundaries and ultimately defining the future of the sport. I look forward to seeing the results of the project translate to an even greater performance of our elite surfers.”

The opening of facility also coincided with Hurley extending its naming rights partnership with the HPC for a further three-year term. 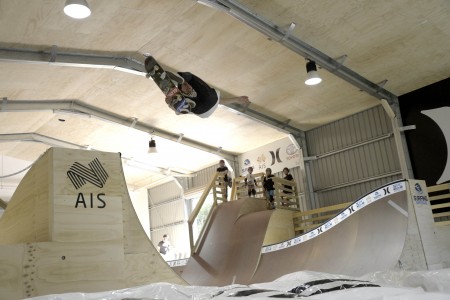 Surfing Australia Chief Executive Andrew Stark “we are extremely excited to be opening the world’s first surfing specific skate facility that will ensure our Australian surfers have every possible training advantage to excel on the world stage.

Designed in consultation with the AIS and the Australian Sports Commission (ASC), the HPC opened its doors in June 2012. Three years on, the HPC is the benchmark for surf coaching globally.