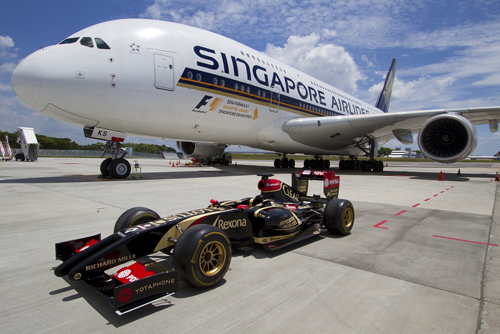 Singapore Airlines has signed an agreement with the Formula One Group to be the title sponsor of the Formula 1 Singapore Grand Prix, replacing telecommunications company SingTel.

With the carrier bidding to promote its brand to motor racing's global television audience, the 2014 F1 race, taking place from 19th to 21st September at the Marina Bay Street Circuit, will be known as the Formula 1 Singapore Airlines Singapore Grand Prix.

Explaining the sponsorship, Singapore Airlines Chief Executive Goh Choon Phong stated “we are thrilled to be taking up the title sponsorship of one of the most exciting races on the F1® calendar, and we are especially pleased to be doing so in the lead-up to Singapore’s 50th birthday next year.

“Singapore Airlines has always supported the development of both sports and tourism. Through our involvement with the world’s first F1® night race we will be able to enhance both for the benefit of Singaporeans and visitors alike.”

Formula One Group Chief Executive Bernie Ecclestone added “we are very happy to have Singapore Airlines join the Formula One family by becoming the Title Sponsor of the extremely popular FORMULA 1 SINGAPORE GRAND PRIX, which was the first Formula 1® night race, and demonstrates Singapore’s forward thinking, an attribute Singapore Airlines has always achieved.”

In 2014, Formula 1 was watched by over 450 million unique television viewers from 185 territories. The 2014 FIA Formula One World Championship™ runs from March to November and spans 19 races in 19 countries across five continents.