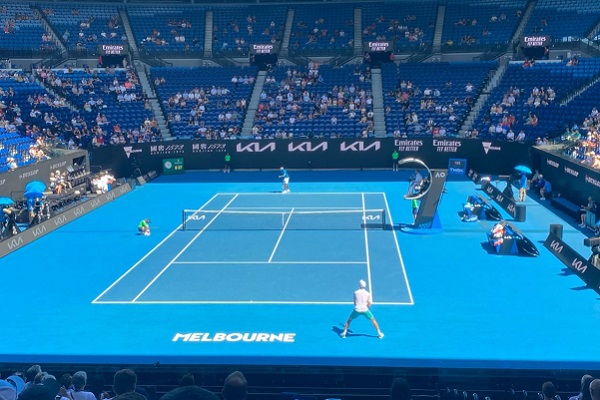 Craig Tiley, Chief Executive of Tennis Australia and Tournament Director of the Australian Open, has said that he expects the total losses from going ahead with this year’s tournament to exceed $99 million due to reduced crowd numbers and the additional costs incurred due to the COVID-19 pandemic.

Tiley has said it will take years for Tennis Australia to recover the cost of staging this year’s Australian Open, but maintains it has been worth it to further strengthen the tournament’s standing on the tennis calendar.

He advised that the significant fall in ticketing revenue was the biggest contribution to the loss, with the event having operated with a cap of 30,000 spectators per day - around 50% of the usual number of spectators for the grand slam - but also being subject to five days when it operated behind closed doors due to the Victoria’s most recent Coronavirus lockdown from 12th February.

During that time more than 100,000 tickets were refunded.

Tiley identified that the second-largest factor in the losses were the costs associated with COVID safety protocols, most prominently the bill for the 14-day ‘hard quarantine’ hotel stays many players had to undergo upon arrival to Australia after the virus was detected on the chartered flights that brought them to the country.

Speaking to Melbourne radio station SEN on Friday ahead of the Australian Open’s final weekend, Tiley commented “it’s going to be tough. It’s not going to be easy. We’re going to lose multimillions of dollars on this event.

“Obviously we took a big hit with five days with no fans, as you don’t sell merchandise [and] sponsors don’t get activation. You don’t sell tickets or premium hospitality. So five of 14 days, that’s a big hit.

“We have $80 million in reserve and we will exhaust that and we will take anywhere from a $40 million to $60 million loan. It’s a big loss, but we haven’t finalised the number yet. We’ve still got to see what our receipts are.”

Despite the losses, Tiley declared himself proud with how the event had proceeded and said it had given “a playbook we can now share with the rest of the world” for hosting major sporting events while the pandemic continues to impact organisers.

With only one case of a player contracting Coronavirus was recorded over the course of the two-week competition, Tiley added “we’ve made Melburnians, Victorians and Australians proud that no one in the pandemic has brought in this many international stars from that many hot spots around the world and played an international sporting event … in front of crowds.

“Maybe there’s a way for us to get sports and entertainment up and going again; we’ve got the model and we’ve learned a lot.”

The losses coincide with the Australian Open posting its lowest TV viewing figures in years.

Two spectators were ejected from Rod Laver Arena after their protests halted play during the men’s singles final.

Midway through the second set between Novak Djokovic and Daniil Medvedev, two spectators began yelling loudly, forcing the umpire to call a let and have the point replayed.

Video from fellow spectators appear to show one of the patrons wearing a top with the words ‘end systemic racism’ written on the back as both were escorted from the venue by security.

During the post-game speeches, Tennis Australia Chair Jayne Hrdlicka was booed my members of the crowd when she thanked after she thanked the Victorian Government for making the tournament possible and when she mentioned the rollout of the Coronavirus vaccine.

The booing was yesterday condemned by Deputy Prime Minister, Michael McCormack who criticised the "disgusting" behaviour of some Australian Open tennis final fans.

Deputy Prime Minister, McCormack stated “I don't like booing at any event, and certainly any sporting event

"This vaccine is going to get our country back to some sort of pre-COVID normality."

8th January 2021 - 30,000 children to get a taste of Australian Open as part of new school holiday program