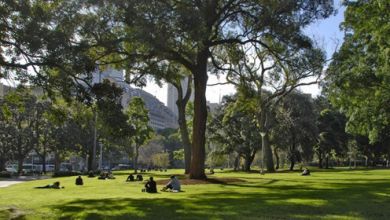 A tree house for children and a more relaxed setting for parents are part of City of Sydney plans to transform Redfern’s Reconciliation Park into a more enjoyable public place.

The existing playground will be extended to include a tree house with a spinning ‘drop-zone’ pole and other new play equipment that kids will love, as well as new seating to allow parents and carers to relax.

Also included in the makeover are a community garden, repaved and widened pathways for easier access, and better lighting and sight lines for parents to keep tabs on their little ones.

Introducing the plans, Sydney Lord Mayor Clover Moore explained “I started my political career fighting for better play facilities and am delighted to say that Reconciliation Park will soon be a much better place for kids and their parents."

“The tree house beneath the shade of a tree and a slide and swings will be popular with kids, while parents will be able to enjoy better seating and greater visibility across the park.

While 17 of the park’s trees will be preserved, four trees along its perimeter will have to be removed to make way for the community garden and a safer entrance to the 1,260 metre2 park.

Replacement trees will be planted in the playground and low shrubs and groundcovers elsewhere.

Reconciliation Park’s famous Think Locally, Act Globally mural will be protected by a fence during construction from September to February.

Contractors will also replace about 30 cm of top soil with a fresh layer in the 70 metre2 community garden area.

The renewal project follows a positive public consultation process that began when 33 Darlington Primary School students made more than 500 suggestions for the park.

A design plan mailed to 250 residents was followed by a meeting with City of Sydney staff on site in February.

Improvements to the park are part of the City’s Parks General Upgrade Program to provide residents with a broad range of quality play facilities.

The City’s local government area has more than 400 large, medium and pocket parks and open spaces.

Residents, visitors and workers recently ranked them the best in NSW in an independent state-wide survey.

The Benchmark Park Users Satisfaction Survey rated the City’s network of parks first among those of nine other councils reviewed.