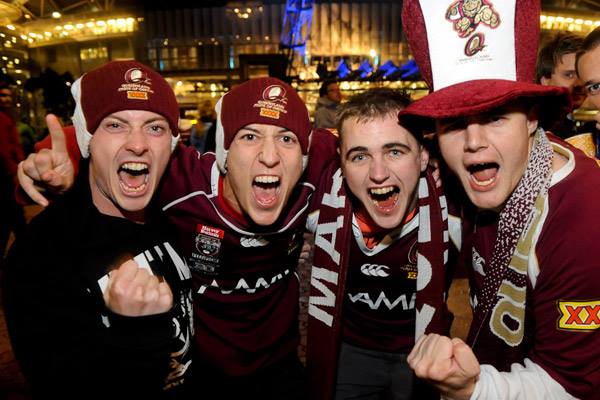 With a sell out crowd set to attend the 2015 State of Origin decider at Brisbane’s Suncorp Stadium tonight (8th July), the Queensland Rugby League (QRL) have announced plans to make the Maroons fan experience even more interactive in 2016.

To be staged for a week around Game Two of the 2016 State of Origin series, 'Maroon Fest' will feature a diverse range of activities and experiences showcasing music, food, fitness, history and Queensland legends.

A news item at nrl.com advised that the QRL invited 150 Maroon Members to mingle with former legends and the team for Game Three on Saturday where autographs, selfies and stories were in high demand, a mere teaser of what is to come next year.

"Economically for Queensland the event will provide a significant boost for local business and no doubt as the event grows in stature and word spreads, it will generate further valuable promotion for the state as an event destination."

Maroons legend Trevor Gillmeister said at the launch of Maroon Fest on Saturday he was continually amazed at how the Origin beast continues to grow in stature with every series that passes.

Gillmeister added “you wouldn't have thought it could get any bigger but then the next year it does... it blows me away.

"I've been lucky enough to go up north to North Queensland and those areas and they're just mad on it.

"Full credit to the players too because they do a great job promoting the game and I know especially with our blokes, Mal (Queensland coach Mal Meninga) always makes sure there is something done in the country areas.

"The Queensland people just love it."

The launch of Maroon Fest was held at Jupiters Hotel and Casino on the Gold Coast on Saturday and both it and Treasury Casino in Brisbane will provide a place for Maroons fans to gather on Wednesday night should they have missed out on tickets to the big game.

The QRL and Echo Entertainment, owners of both properties, are in the early stages of a three-year partnership and Treasury and Jupiters Managing Director Geoff Hogg said Origin will provide the centrepiece of a broader celebration.

Hogg stated “our reasoning for wanting to link arms with the governing body and the Maroons was simple.

"Having a strong and ongoing connection to the communities in which we operate, and fostering local spirit, is incredibly important to us.

"Maroon Fest has a wonderful potential to grow into an iconic celebration that people will want to mark on the calendar each year.

"It will flourish and provide a vehicle by which Queenslanders – and others around Australia who want to get in on the fun – can come together and celebrate."

Tonight’s 2015 State of Origin decider is also set to reach a record combined crowd for the three-game series.