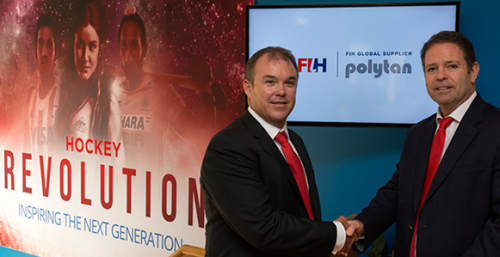 The International Hockey Federation (FIH) has named Polytan as its official Global Supplier, guaranteeing the company exclusive rights including the supply of the turfs for the 2018 and 2022 Hockey World Cups and the Tokyo 2020 Olympic Games.

The seven-year partnership, with an option for a two year extension to incorporate the 2024 Olympic Games, represents a major leap for the FIH and is proof that its ‘Hockey Revolution’ strategy provides hockey’s partners with real business opportunities.

This relationship signifies a major increase in the commercial value of hockey. As well as a significant investment, the agreement includes the provision of hockey turfs for the 2018 and 2022 men’s and women’s Hockey World Cups and the Tokyo 2020 Olympic Games.

One of the key features will be the creation of an FIH Hockey World Cup turf that will add value to Polytan’s product range and build brand equity for FIH.

FIH will also actively support Polytan’s business in key growth markets such as India and China and traditional hockey markets in Europe and Australasia.

Additionally, Polytan will be provided with a customised set of visibility, marketing and networking opportunities that are all designed to actively create new business.

Announcing the partnership, FIH Chief Executive Kelly Fairweather stated “we are delighted to confirm this partnership with Polytan, an organisation that has built a solid foundation of trust having delivered a number of world class hockey turfs over the years, including at both the London 2012 and Rio 2016 Olympic venues.

“Being named as our Global Supplier is recognition of both their continued investment in our sport and their innovative approach to developing top quality surfaces to play hockey on.”

FIH President Leandro Negre also stated “Polytan’s commitment to hockey and growing the game, along with their professional approach and renowned quality ensured this was the perfect match for both organisations.

“We look forward to working with them to build hockey over the coming years through their commitment to and engagement in our 10-year Hockey Revolution strategy, aimed at making hockey a global game that inspires the next generation.” 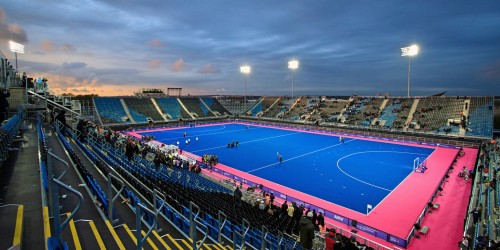 Frank Dittrich, Chief Executive of SportGroup (the owners of Polytan) added “this relationship is incredibly important for the future of hockey, a sport which we firmly believe in.

“That’s why we have done everything in our power to develop class-leading products to enable us to become a strong partner that FIH can trust..

“This has involved a considerable amount of investment which has seen our experts draw upon the knowledge of FIH and seek practical input from the sport’s leading athletes.

“This shows just how passionate we are about providing the best for our customers - something that will be recognised by the sport as we continue to work with FIH to develop hockey over the coming years as part of our relationship.”

This latest partnership follows last year’s launch of the FIH Quality Program for Hockey Turf, aimed at ensuring good quality hockey fields are built for all levels of play, from elite level competition to community development.

Images: Stephen Niven, Chief Executive of Sport Group Asia Pacific with FIH Chief Executive Kelly Fairweather (top) and Polytan as installed for the hockey tournament at the London 2012 Olympics (below).