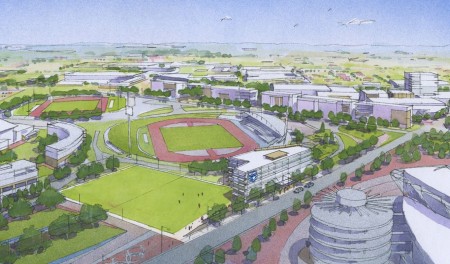 Announcing the project, NSW Minister for Sport Stuart Ayres said the facility will be a game changer for the code in NSW.

Minister Ayres stated "for over a century, NSW has been the spiritual home of rugby league (and) this complex will provide a pathway for emerging talent from junior representative sides through to the NSW Blues State of Origin team.

“The NSW Government is committed to providing the highest quality facilities to ensure the longevity and future success of rugby league in this State.”

The Centre of Excellence will include a full size training field next to the Athletic Centre and a new building for specialised support facilities and the offices of the NSW Rugby League.

It will also adjoin a tunnel providing direct access to ANZ Stadium – originally built to transfer track and field athletes during the Sydney 2000 Olympics. 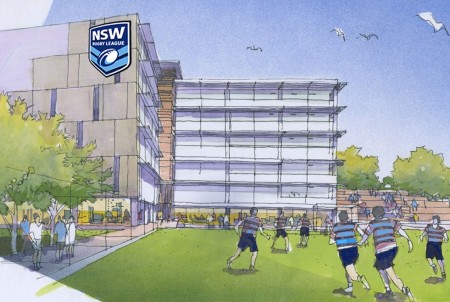 NSWRL Chairman Dr George Peponis said the Centre of Excellence places NSWRL at the forefront of sporting organisations in Australia.

Dr Peponis “it will be the equal of or better than any high performance facility of any sport in the country.”

NSWRL Chief Executive David Trodden said support from the NSW Government and Sydney Olympic Park Authority will set the game up for long term success at all levels, adding “the benefits will extend to everyone in the NSW rugby league family. Our junior players, refs and women’s teams will all have use of the facility and, at times, the other specialist sports grounds in the precinct.”

This investment highlights the continuing growth of Sydney Olympic Park as a sporting and business gateway to Western Sydney, with Netball Central, the NSW Institute of Sport, Samsung and Lion Group amongst those who call it home.

The NSWRL Centre of Excellence is expected to be completed in late 2017.

Images: Artist's impressions of the planned NSWRL Centre of Excellence.