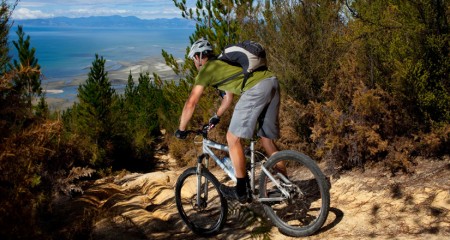 Nelson now joins a select group of locations around the world deemed to be of the highest riding standard.

A recent assessment of Nelson's trails by IMBA Trails Specialist Jason Wells left him impressed with the very high standard of riding and accessibility of the region's rides.

The IMBA said riding Nelson's trails was "a year-round adventure, with sunny days with bluebird skies the norm throughout the year", adding "the riding options include several bike parks, as well as more natural trails in both plantation forest and native bush. The range of trail types is amazing, from gentle, family-oriented trail riding to full-on downhill runs, backcountry adventures and everything in between."

Nelson and Rotorua are now the only two locations outside of the USA accredited at this level. They join Taupo which has held a Silver Ride Centre level for the last three years.

The IMBA has until this year only ever accredited one Gold Ride Centre, Park City in Utah. A high level of interest in 2015 in the Ride Centre program has seen five other Gold Ride Centres added, three of those in the US and Nelson and Rotorua.

Nelson's Gold Ride Centre status covers all of the mountainbike trails within a defined radius of a city centre.

It includes the full network of trails between the Hira Forest in the Maitai Valley, right through the front country between Nelson and Richmond, to Rabbit Island and the Kaiteriteri Mountainbike Park.

The Mountain Bike Trails Trust invited the IMBA to Nelson, with Chairman Chris Mildon saying that the IMBA ranking was "just massive" and it opened doors for an important international marketing presence for the region.

Mildon told Fairfax media "the result for the region shouldn't be under estimated, with a global market looking to IMBA for its recommendations of where to ride. While our mountainbike trail system is first and foremost a community asset, the regional benefits of drawing mountainbike visitors to ride and holiday here can only be a good thing.

"Many small towns in Europe and the US, such as Oakridge in Oregon, have recognised the importance of mountainbiking to growing their economies and are actively promoting the development of high quality trail networks, providing facilities such as toilets and bike washes at trailheads to support this."

The IMBA has recognised trails and trail systems around the world that stand out as models for the best that mountain biking has to offer for more than a decade.

It said that this year interest in its Ride Centres category had "absolutely exploded, with an unprecedented number of applications" and 13 outstanding trail systems recognised.