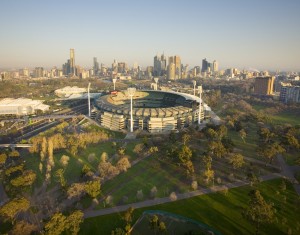 The facility, which has been in operation since December 2012, has recycled 240 million litres of water (or 96 Olympic-sized swimming pools) to date. Of that, 80 million litres has been used for toilet flushing and cleaning at the MCG.

MCC Chief Executive Stephen Gough explains "over the past decade Victoria has faced one of the worst droughts.

"We identified the provision of a sustainable water supply as one the key planks to ensuring the long-term sustainability, health and viability of Yarra Park.

"We're thrilled with the volume of water saved to this point. It has substantially reduced our reliance on potable water within the stadium and it has increased park amenity for all users."

The plant produces up to 600,000 litres per day of Class A recycled water, reducing the MCG's use of potable water by about 50%.

Construction of the $18 million underground plant in Yarra Park was funded by the MCC. It was completed late in 2012, following a comprehensive testing regime to ensure the water quality met EPA guidelines.

In September, the facility was awarded the President's Award at the 2014 Victorian Engineering Excellence Awards. An innovative approach to design and construction added to the facility's ability to produce large volumes of high-quality water in such a small space.

National Water Week will be held from October 19-25 across Australia, hosted by each state and territory.

While the week is about encouraging communities to take action to protect our vital water sources, it's also a celebration of innovation and water achievements that have and will contribute to Australia's sustainable future.

For more information about the MCC's long-term plans for Yarra Park go to www.mcg.org.au.