Lollipop’s Playlands is set to mark a significant milestone with the opening of its 20th indoor play centre in Australia this week.

The new centre, in Croydon in Melbourne’s outer eastern suburbs, will join four play lands in Victoria, seven in NSW, five in Queensland, and one each in the ACT, South Australia and Western Australia.

The franchised business, a leader in the indoor play sector in Australia is owned by Drectors Tim Newman-Morris and Bret Stremski who have been working together for five years.

Newman-Morris – a former Lollipop’s Playland franchisee – purchased the Australian Master franchise – which then had just eight play lands – with a long term goal of providing a quality indoor play space that would pass the harsh test of his own children.

Stremski, who worked for McDonald’s Corporation for 20 years, joined after selling his McDonald’s franchise, with the pair going on to purchase the worldwide Lollipop’s International business from founder Alan Grant.

Each of Lollipop’s 20 Australian centres provide a secure environment (locked gates with children given an ID bracelet on entry) with challenging climbing frames, a variety of slides and tunnels, ball pits, air play zones and merry go rounds – all within the parents’ view. 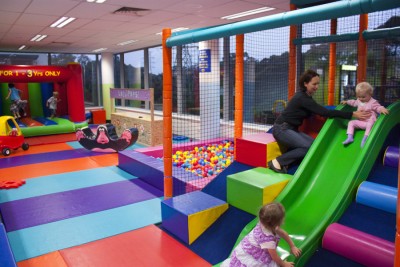 Each Playland has a café with professional kitchen to prepare meals for customers but also food for birthday parties, a large part of their business.

Newman-Morris explains “growing up in Melbourne, there were always days when it was too rainy for the park, or too hot for the beach.

“But play lands didn’t exist in my day.

“After we had twin boys - now aged 9, you realise you need somewhere safe to take them to burn off all that energy – without losing them.

“Once they make little friends of their own, you don’t want parties at home anymore. Lollipop’s provides both.”

The franchise also has 10 international sites including six impressive centres in Indonesia: in Senayan City, Mall Kelapa Gading , Gandaria City, Seminyak on Bali – with an outdoor water play area, Living World at Alam Sutera and Ciputra World at Kuningan – which has a mini train that chugs around the centre.

Each of the 20 Australian play lands differ slightly in configuration – two have climbing walls, some have a pirate ship ride, some have a teacup ride, some host kid’s discos, others run school holiday programs -  but all provide a visually colourful environment with lights, movement and music that keeps kids spellbound.

Newman-Morris adds “one parent came in for the first time with her 16-month-old son, who had never left her side.

“This toddler walked through the gate, saw the slides, his eyes lit up and he let go of her hand and just ran.

“He couldn’t get up the climbing frame quick enough. It was the first time that mum had been able to sit and have a coffee.”

Currently, over two million people visit a Lollipop’s Playland every year across its 30 sites internationally, while the franchise has another four Australian sites planned to open in 2015 and a further four international sites in development.

For more information go to www.lollipopsplayland.com.au