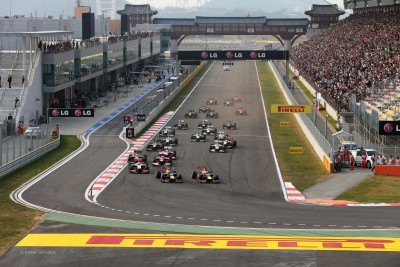 The Korean Grand Prix is set to return to the Formula One calendar in 2015 after being listed as a surprise inclusion on a provisional calendar that swells to a record 21 races.

Having hosted a grand prix since 2010 the event was dropped from this season’s schedule amid long-running speculation over its future. The race is held at the remote location of Yeongam with initial visions of the circuit being the centrepiece of a ‘sports city’ development. However, this development has not transpired and the event had continually suffered from poor attendances.

Nevertheless, the International Automobile Federation (FIA) has listed Korea as the fifth round of the season on 3rd May, sandwiched between the Bahrain GP and the Spanish GP.

F1 teams have stated their reluctance to expand the calendar beyond 20 races and the Korean GP has been listed as ‘to be confirmed’ by the FIA.

The Korean Grand Prix was held from 2010 until 2013, but was dropped from the calendar in 2014 having struggled to attract crowds.

The World Motor Sport Council (WMSC) has also confirmed that the controversial double points rule will be removed for the 2015 season. The rule awarding double points at the season-ending Abu Dhabi GP could have had a major effect on the drivers’ championship with Mercedes’ Lewis Hamilton and Nico Rosberg in contention for the title heading into last month’s race.

The FIA is also looking to reduce the costs of F1 while making cars quicker and more difficult to drive, and reviewing the technical and sporting regulations, with the aim of simplifying the rules where possible.