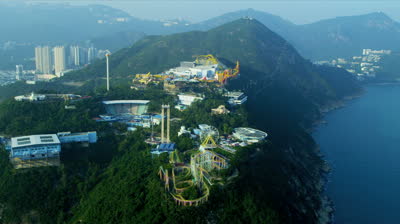 The Hong Kong Government is to inject HK$310 million (US$39.6 million) into the loss making Ocean Park theme park in an initiative that will include paying for 10,000 free tickets for students.

Hong Kong Financial Secretary Paul Chan Mo-po revealed the unprecedented funding this week – in the administrative region’s annual budget -  as part of a HK$706 million package to freshen up Hong Kong’s waning image as a tourism hub and lure big-spending visitors from places other than mainland China.

Other measures which might indirectly boost the local tourism market include a proposed e-sports hub, museum expansions and extra cash to preserve cultural heritage.

However, the South China Morning Post reports that there are concerns that an unbalanced mix of tourists could hurt the industry’s stability and long-term growth. Out of 58.5 million visitors to Hong Kong in 2017, 76% were from mainland China, underlining the city’s heavy reliance on guests from north of the border.

The imbalance has been made particularly clear for Ocean Park in recent years, during which a drop in the number of mainland visitors led to a drop in attendance and a financial deficit for the attraction.

Located on the south of Hong Kong Island, the theme park lost HK$234 million in the financial year ending 30th June 2017, following a HK$241 million deficit the year before.

Backing the attraction for the first time, the Hong Kong Government’s one-off sum of HK$310 million is to “develop education and tourism projects”.

Secretary Chan explained “it is vital for large-scale theme parks to make sure their attractions can continuously lure visitors.

“We see that there is room for Ocean Park to improve in this regard.”

A total of 10,000 free tickets will also be distributed to local primary and secondary students in the coming year.

Image: Attractions at the summit of Ocean Park Hong Kong.