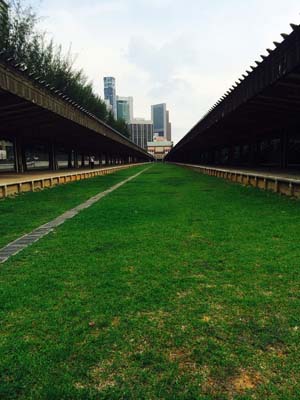 The Singaporean Government has announced a shortlist of five architectural firms who will be tasked with developing an environmentally friendly plan for the Singapore Rail Corridor.

The Rail Corridor, a 24 kilometre long section of disused track that spans Singapore from north to south, was the island nation’s previous rail link to Malaysia. Also known as the 'Green Corridor', the space cuts through some of Singapore’s priciest real estate and provides an important area of green space in the densely populated city.

Following the phenomenal success of New York’s High Line – a disused railway transformed into a public greenway – Singapore’s Government is looking for a project that is strong in responding to the ecology of the site and that can respect its natural qualities.

Introducing the project, a Singapore Government statement explained "we want the corridor to be an outstanding urban asset, and are therefore open to innovative concepts, particularly in and around the nodes; ideas that demonstrate freshness of approach and potentially exceptional design qualities that will enhance our urban landscape.”

An unlikely nature preserve in the urban heart of the city, the Rail Corridor also hosts the Green Corridor Run.

Out of 64 firms who responded to the Government’s call for ideas to transform the Singapore Rail Corridor, five teams made up of West 8 and DP Architects; Grant Associates and MVRDV with Architects 61; Turenscape International and MKPL Architects; Nikken Sekkei with Tierra Design; and OLIN Partnership and OMA Asia with DP Architects have been selected to move onto the architectural competition’s second stage.

Commenting on their shortlisting OMA Partner Michael Kokora stated "the expanse of the corridor running through the centre of the entire country presents an unprecedented opportunity to develop a new typology of landscape with transformative effects for the country as a whole.

“This is a project that has the potential to improve quality of life for generations to come.”

The teams will now develop proposals for Singapore’s Rail Corridor with a public preview set for between October and December and the winning team to be announced at a later date.

Interest in similar projects around the world has seen plans announced for a High Line-stye ‘Skygarden’ in the South Korean capital of Seoul, a project for Miami’s underground Underline and an underline for cyclists and pedestrians in London.

The Sydney Harbour Foreshore Authority's Goods Line project, transforming a disused rail corridor in the Sydney suburb of Ultimo into a pedestrian and cycle network is expected to open in the coming months.

The teams will now develop proposals for Singapore’s Rail Corridor with a public preview set for between October and December and the winning team to be announced at a later date.