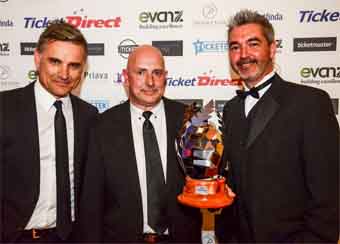 Claudelands was also named Large Venue of the Year at the Awards, presented on Monday (1st December) during the EVANZ annual conference in Dunedin.

Judges acknowledged Claudelands as "a brilliant venue" that has "in a very short time secured a reputation as a successful multi-purpose venue attracting bookings from international, national and local event promotors and organisers."

Parker's Award recognised "Keith as one of the best operations managers in the country (who) continually looks to raise the bar and set standards in operational delivery never believing that he has learnt all that there is to learn and always looking to push the bounds in his team's delivery of (Eden) Park to the hirer and patrons alike."

Keith Parker was a triple winner at the Awards, also receiving the Operations Manager of the Year Award and EVANZ's Industry Contribution Award for his role in increasing membership of EVANZ particularly in the stadium and arena sector by organising operations forums for EVANZ members and potential members, setting up the annual Event Scholarships for EVANZ venue staff fand his role in the development of EVANZ having served two terms on the Association's Executive.

Winners in the 11 award categories were: