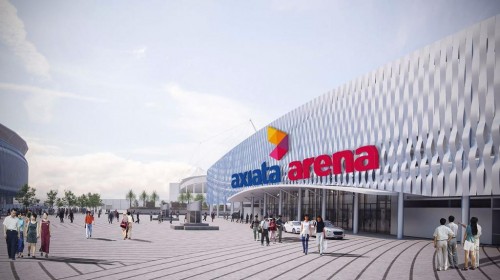 The 16,000 seat indoor arena, part of the Bukit Jalil Sports Complex, one of the key venues for August’s 29th South East Asian (SEA) Games and 9th ASEAN Para Games, is an integral part of the redevelopment of the precinct as the KL Sports City.

Announcing the naming rights deal, Malaysia’s Youth and Sports Minister Khairy Jamaluddin promised that, more than a change of name, the venue would be a key part of an international sporting destination made accessible to all walks of life in Malaysia.

Set for completion in July, the Axiata Arena deal, worth RM55 million over 10 years, was brokered by TSA.

Commenting on the deal, Minister Khairy stated “Axiata Arena will be the crown jewel of the KL Sports City (and will) be equipped with the latest technology with world class facilities.

“We built the Bukit Jalil Sports Complex for the 1998 Commonwealth Games. But let’s face it ... it didn’t measure up as a sporting destination. It was under-utilised. We’re changing all that.

“Sports followers can now go to the stadium without worrying about sub-standard facilities. The toilets will be clean.

“They can upload Instagram photos without having to deal with congestions. The venue will be supported with good transportation system. And they can even watch their athletes in training.

“From outside, the building may look the same but it’s different. It’s so much better.”

Khairy explained that the KL Sports City will provide spaces for people to work out, to jog, to swim and to spend time in open spaces.

There are also plans to build futsal and basketball courts and facilities for X-Games under the second phase of renovations after the SEA Games.

He added “all these things are missing. There are only huge spaces for car park and monuments. Sports fan only come here for major sporting events and concerts and they rush back home.

“We’ll have all these facilities and it’ll be open 24/7. I’ve also asked Axiata to come out with events for the public like runs, cycling races ... ideally, this will be the home of Malaysian sports.”