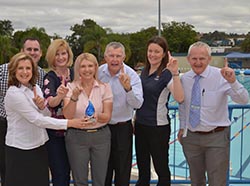 AUSTSWIM has named the Aqualogan Laurie Lawrence Swim School as the winner of its 2014 Recognised Swim Centre Award.

Part of AUSTSWIM’s premier national awards that recognise those that achieve the highest standard of ‘Aquatic Education Excellence’, the award was presented last week to Laurie Lawrence and swim school team members at the Logan North Aquatic and Fitness Centre, Underwood, where learn to swim classes are held.

Presenting the Award, Bradley Low, Chair of the AUSTSWIM State Advisory Committee, stated “12 months ago you were presented with the Queensland AUSTSWIM

Accepting the award, former Olympic swimming coach Laurie Lawrence said teachers had every reason to be proud of their achievements.

Lawrence stated “every single one of the teachers here at Aqualogan Laurie Lawrence Swim School is committed to improving themselves as a teacher.

“For us to win this award is an absolutely fantastic achievement and it's a credit to every single teacher here.”

Logan City Mayor Pam Parker congratulated Lawrence and the swimming program staff for their efforts in teaching children to swim at the centre, adding “without your commitment to professionally teaching our children through the  Aqualogan Laurie Lawrence Swim School Program, this would not have happened.”

"Awards are great morale boosters, but what matters is that you are saving  young lives, and to each and every swim teacher I say thank you from the  people of Logan."

There are currently more than 32,000 AUSTSWIM accredited Teachers in  Australia and overseas with 10,000 of these teachers licensed to teach  specific programs for infants and people with a disability.

AUSTSWIM will make a formal presentation of its national awards at the upcoming 'Soak It Up' Aquatic Education Conference on the Gold Coast.