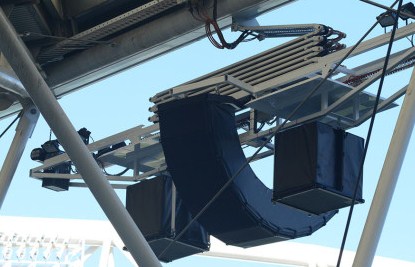 ANZ Stadium is set to complete the upgrading of its new sound system in time for rugby league's State of Origin I on Wednesday 5th June.

With the aim of delivering a more engaging and exciting experience for the Stadium audience, the new system, valued at over $3 million, is being touted as the NSW Blues' secret weapon to will whip up a pro-Blues atmosphere.

Fans at recent NRL games and the Waratahs v Brumbies Super Rugby showdown have already had a sneak preview of the atmosphere created by the new sound system.

ANZ Stadium engaged Scott Willsallen from Auditoria Pty Ltd, the sound systems designer for the London 2012 Ceremonies, to design and manage the project. He rates the new sound system "at the top end of stadium sound systems anywhere in the world".

Willsalen explains "to give you some idea how advanced this system is, it rates with internationally accepted touring sound systems used by many A-level artists - think U2, Metallica, Bon Jovi - around the world."

Sydney-based installation contractor, The P.A. People, is installing the new system in four stages during May. The new system was manufactured by world-leading d&b audiotechnik in Germany and supplied by National Audio Systems (NAS) from Melbourne.

"The modern game-day experience demands high performance in every respect, and sound is a critical element in engaging an audience.

"While the new system will deliver concert-like sound to the Stadium audience, the design uses sophisticated techniques to shape the sound energy from the loudspeaker arrays to minimise the amount of bass sound escaping the Stadium."

The new sound system comes with a roof open/roof closed setting in anticipation of the proposed retractable see-through roof that is part of the Stadium's masterplan.

To find out more about The P.A. People, click here to view their entry in the Australasian Leisure Management Supplier Directory.