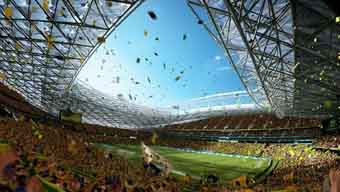 The operators of Sydney's ANZ Stadium are apparently confident that they will secure NSW Government funding for a proposed major redevelopment of the former Olympic Stadium and its surrounding precinct.

ANZ Stadium's management yesterday (18th November) unveiled plans for a $350 million facelift for the venue including a retractable roof that can close in 20 minutes and moveable grandstands at either end of the stadium to create a rectangular field for rugby union, rugby league and football matches.

The plans also call for for a light rail line to be built between the suburbs of Parramatta and Sydney Olympic Park.

Stadium Australia Operations (SAO) Managing Director Daryl Kerry said the venue had delivered $5 billion to the economy since it was built in 1999, and was continuing to pump money into NSW, stating "we're spending absolutely no time on focussing on what we would do if this doesn't get up.”

Kerry told the ABC that he was in discussions with the NSW Government about a funding model and had "great confidence" it would be successful.

Kerry did not reveal when he expected NSW Government approval, except to say he believed it would be given before next year's election.

ANZ, which funded the development of the Stadium as an Olympic venue and which has a lease for the venue until 2031, has offered to relinquish its rights to the surrounding precinct to allow private investors to develop an entertainment area.

Kerry added “what we have delivered is a complete solution for the Government.”

If agreed and funded, construction is proposed to start after the 2016 NRL Grand Final for completion before the 2018 State of Origin rugby league series.