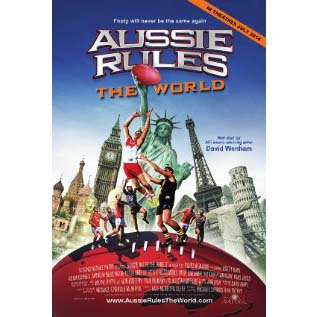 A new film documents the AFL's desire to be a competitive sport in the global market.

Released in the week that the FIFA 2014 World Cup kicks off in Brazil, Aussie Rules the World follows former AFL star Brett Kirk on an international mission to promote the game.

Narrated by award winning actor David Wenham – the film uncovers people’s passion for footy in unexpected corners of the globe.

Since retiring from his role as Premiership Captain at the Sydney Swans, Kirk has been the AFL’s international Ambassador. In this role, he is seen as the perfect man for this demanding role as an inspiring leader, relentless opponent and proud mentor to many young players across the world of AFL

Aussie Rules the World follows Kirk on challenging and personal journey with his wife Haley and four children through 23 countries in six months introducing the famous Australian AFL sherrin football to hundreds of would be enthusiasts.

For more information on the film along with screening details, visit the Aussie Rules the World website.