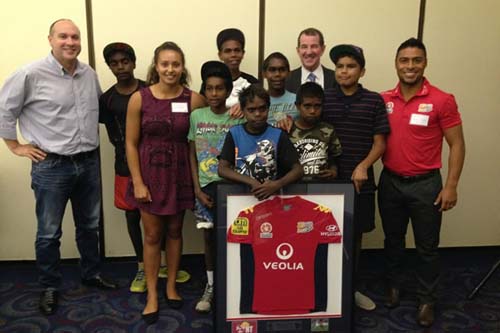 The Northern Territory Government has teamed up with Adelaide United Football Club (AUFC) and the Football Federation of Australia to deliver a new Aboriginal and Torres Strait Islander Youth Program in Central Australia.

Launching the program in Alice Springs, Northern Territory Minister for Sport, Recreation and Racing Matt Conlan stated "this new program is an exciting aspect of the Government's partnership with Adelaide United.

"Our agreement is about much more than bringing A-League pre-season games to the Centre.

"It is about using a sport like football as a catalyst for young Indigenous people throughout Central Australia to gain a wide range of life skills, knowledge and experiences that can help them become positive member of their communities.

"The program will not just be about football it will also focus on culture, leadership, education and training and the importance of school attendance.

"Indigenous youths in our communities are amongst the most vulnerable in the country. But it is hoped this program will help set them on a path to a meaningful life.

"Football is a popular sport in the Centre and this program, and the Northern Territory Government's agreement with Adelaide United, will help grow the sport further.

"Having a full-time Development Officer with links to Adelaide United based in the Centre, will significantly help with the development of our junior players and improve their pathways to the elite level.

"Our ultimate aim is to hopefully one day see a Central Australian running around in the Hyundai A-League."

It includes an eight to 10 week program for year levels 5,6,7,8 and 9 and will be led by Alice Springs based AUFC Development Officer, Diego Gomez.

The Territory Government's two-year agreement with the Adelaide United Football Club will also see AUFC play a pre-season match in Alice Springs in 2014 and 2015.