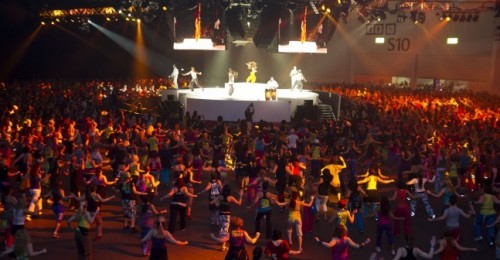 Thousands of Zumba Fitness participants are expected to to take part in Australia's first ever Zumba® Fitness-Concert in Sydney on Saturday 28th April.

Taking place alongside the Australian Fitness and Health Expo at the Sydney Convention and Exhibition Centre, the event will be led by Zumba program creator and co-founder Beto.

Zumba's Fitness-Concerts are a fitness concept that has evolved into an interactive, multisensory dance party set to global rhythms and supported by an international cast of dancers, musicians and producers.

Beto says this exhilarating experience will be like nothing anyone has experienced before in Australia, stating "think of a concert you've been to in the past - the vibe it had, the sound, the adrenalin.

"Now imagine mixing it with hot global dance routines and a crowd of thousands moving in unison."

A concept not yet seen in Australia, the 90-minute Zumba Fitness-Concert is a show and workout all rolled into one that allows participants to burn more than 1,000 calories without experiencing the 'pain' of traditional exercise.

The 28th April Zumba Fitness-Concert in Sydney will be a lively concert environment complete with spectacular lighting, electrifying sound, stunning costumes and a crowd of thousands.

Zumba's largest Fitness-Concert was held in the United States last year at the annual Zumba Instructor Convention in Orlando attracting a crowd of more than 7,000.

For tickets go to www.zumba.com/fitnessconcert/au