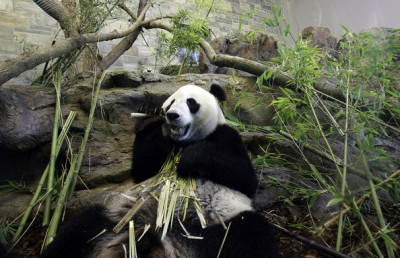 With its 10-year set to expire in November, Adelaide Zoo is seeking to keep the only giant pandas in the southern hemisphere into the future.

While giant pandas, Wang Wang and Fu Ni have yet to produce offspring, Zoos SA say they want to convince the China Wildlife Conservation Association to allow the pandas to stay in South Australia, and are hoping the Federal Government will join their push to secure the pair long term.

Zoos SA Chief Executive Elaine Bensted said the organisation had already advised their counterparts in China of their intention to extend the stay of the pandas.

Bensted recently advised “Wang Wang and Fu Ni are in Adelaide on a 10-year loan from the China Wildlife Conservation Association with the current loan agreement expiring in November.

"Ultimately, the decision rests with the Australian Government as they provide the funding that goes to giant panda conservation in China.

"We're talking with the Government and we hope to have an answer in the near future.

"We are confident that our purpose-built facilities and our experience in the last nine years give us the best chance possible to successfully breed giant pandas in the future."

Under the current deal, the Federal Government pays $1 million a year to the Chinese Government to house the pair in Adelaide.

The panda pair - who won a silver medal as the most popular pandas outside of China - are part of an international research, conservation and breeding program aimed at preserving the endangered species.

However, despite multiple breeding and artificial insemination attempts Fu Ni has not yet become pregnant, instead experiencing pseudo pregnancies that have dashed the hopes of specialists and keepers.

There are fewer than 1600 giant pandas remaining in the wild.