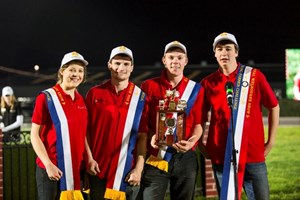 Organisers of the 2015 Royal Melbourne Show say that a strong focus on attracting youth to the Show, through its livestock competitions and agricultural awards, has proven successful with high numbers of young participants.

With increased schools engagement and a record number of teams for the Young Farmer Challenge, Royal Agricultural Society of Victoria (RASV) Chief Executive Mark O’Sullivan said the organisation was delighted with the response in all youth programs.

O’Sullivan stated “RASV has a commitment to highlighting the industry to youth, providing opportunities for development and growth and recognising and rewarding the future leaders in agriculture and we are truly encouraged by the increased engagement at this year’s Show.

“The schools competition is an invaluable way of inspiring youth and providing them a clear pathway for a career in the industry.

“Many of the students involved in the program are from urban non-rural households, whose first experience with livestock is through the schools competition. A number of those participants are now genuinely considering or pursuing a career in agriculture.”

The RASV has echoed work under by other show societies to engage young people.

While engaging young people, families from the Very Special Kids Foundation have criticised the Royal Melbourne Show for a lack of disability-friendly rides on offer.

O'Sullivan responded, telling the ABC that there were provisions for people in wheelchairs so they could enjoy the event with their families.

He stated "the showgrounds were redeveloped some years ago and it is a lot easier to get around.

"There's a lot of flat areas, ramps into different pavilions, it really is all on ground level."

The Royal Melbourne Show, which started on 19th September, closes on Tuesday.