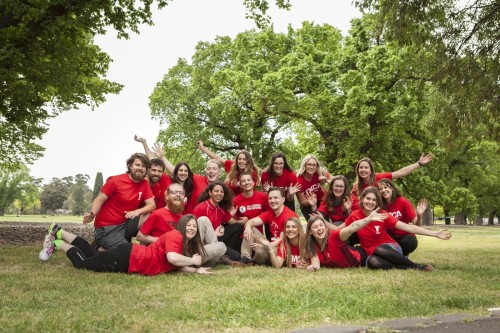 After a year of change and transformation, YMCA Victoria has brought to life its new purpose through a refreshingly different take on the traditional Annual Report.

Back in June, the YMCA reintroduced itself to Australia with the help of Boy George, declaring its belief in inspired young people and vowing to ensure their voices are always heard.

All the stories in YMCA Victoria’s 2016/17 Annual Report are told by young staff, volunteers, and participants under the age of 30.

The report was also developed by young staff under 30.

In his opening piece, YMCA Victoria Chair Stephen Ellich explains “through one lens, the YMCA is the glue that makes communities healthier and happier.

“Through another lens, we are a great partner to local government, corporates, community groups, and others to make things better… and this report showcases just how we do this, as told by a group of inspiring young people.”

Partnerships is a recurring theme throughout the document, highlighting how YMCA Victoria is committed to working towards shared objectives and outcomes. Whether that’s local government partners to deliver on municipal health plans, community-minded corporates, or other not-for-profit charitable organisations - the 2016/17 financial year had a strong focus on working together.

YMCA Victoria Chief Executive Peter Burns adds “this year we worked hard to showcase ourselves as a partner of choice.

“Whether we’re working with local government partners to provide bespoke programs and services to better their communities; Sports and Recreation Victoria to offer cutting-edge inclusive camping opportunities, or major corporates like Brooks to establish the first ever YMCA Father’s Day Fun Run; we truly embrace the notion of together we can do it better.

“Our prime measure for success is mission impact, which is highlighted by the young voices in the document.”

In the past financial year, YMCA Victoria had total revenue of almost $200 million, with a surplus exceeding $2 million. The organisation also raised over $1 million through fundraising, and spent $6.6 million on mission driven work. Of this amount, 70% was went towards supporting young people.

YMCA Victoria managed and owned facilities and programs were visited 16,419,783 times over the year as well, which equates to a visit every three seconds, 24/7, for the entire year.

Moving forward, YMCA Victoria is looking to expand its offerings to the Victoria community - developing a retirement community in Armstrong Creek, as well as continuing to innovate and grow in health and community sectors.

Image: Young YMCA staff, volunteers and participants from the front cover of the 2016/17 Annual Report.