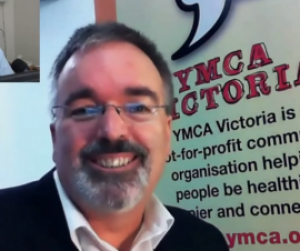 YMCA Victoria is to back members struggling as a result of the current economic downturn by offering members who become unemployed up to three monthâs free membership.

YMCA Victoria Chief Executive Peter Burns (pictured) explains that "from Sunday 21st June 2009 our new policy is to do all we can to refuse applications to cancel membership from members who experience job loss", adding "members will be offered up to 3 month's free membership, to help support them."

For members who find themselves in this position, Burns urges that to "not hesitate to talk to (their) YMCA about taking up this support.

"We realise that gym membership will not be (people's) biggest priority at this time, but we know that exercising and being around others can make a real and significant difference to ongoing physical and mental health, at a time when people are genuinely stressed."

The move results from the findings of the YMCA Community Speaks Survey 2009 which reveals a community dealing with less disposable income (29%). The survey also found that 55% of YMCA members are experiencing increased worry or anxiety over the past six months as a direct result of the global financial crisis.

Those worried or anxious were more likely than those not worried by the global financial crisis to have reduced their spending in all areas, and to be less optimistic about their financial future in 12 months.

As Burns explains "the high levels of worry or anxiety are of concern to the YMCA, which seeks to improve the health and wellbeing of Victorians. Clearly, many are not doing so well emotionally right now and the YMCA will be taking immediate action."

As another part of its response, the YMCA is to launch an affordable Family Membership, for families of all kinds, in the health club and aquatic facilities it manages across the state from 1st July, as part of its goal to improve the health and happiness of Victorians, and to reduce the incidence of lifestyle disease in the community.

Burns conclude "the family membership will encourage more people to have fun and get fit together with their loved ones, which is a known way to help optimise good mental health.

"For many, it may also provide new opportunities and ways to relax and enjoy leisure time, with 1 in 3 (33%) saying the GFC had restricted their leisure and entertainment activity."

• Decreased household income: The household monthly income of almost one in three (29%) had decreased over the last six months with 'blue collar' employees more likely than white collar employees to have increased household income (just over one in every five, or 22%, versus under one in every 10, or 9%).
• Increased grocery spending: Spending on groceries was the one area where household spending had increased (one in every three), compared with decreased spending on holidays, eating out, recreation and leisure, sporting activities and donations to charities.
• Almost one in two country people (47%) had increased their spending on groceries, versus one in three (33%) of Melbourne residents.
• Areas where spending has decreased: Spending on eating out had decreased in two in every five households (40%) while spending on holidays had decreased by more than one in every three households (36%) and recreation and leisure activities spending decreased by more than one in four (29%).

For more information go to www.victoria.ymca.org.au