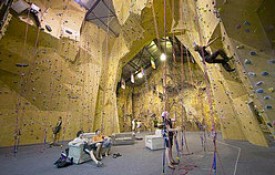 The YMCA of Christchurch is to purchase The Roxx Climbing Centre with its extensive climbing wall, bouldering wall and the popular Clip 'N Climb features.

The decision to purchase has been influenced by the YMCA's desire to extend their reach into the community through provision of quality recreational and outdoor education experiences particularly for young people.

The Roxx centre is a high class facility which attracts tens of thousands of climbers each year. Importantly for the YMCA, many of these climbers are 'first timers' young children who are looking for something active, challenging and different as a physical pursuit outside of the usual mainstream sports.

The current Roxx owners, Tim Wethey and John Targett, who built both the wall and the business from scratch nine years ago, are also the owners of the Clip 'N Climb franchise and brand.

More recently they have been directing their attention on securing international sales of Clip 'N Climb with considerable success. Wethey and Targett are passionate about the development of climbing as a serious sport which not only enhances fitness but also important skills which are transferable to adventures in the outside. They are arguably the country's leading authority on climbing walls and how to get them right for climbers.

The YMCA is not a newcomer to the world of climbing having had their own very large climbing wall at their Hereford Street site in the Christchurch CBD which has operated for decades. What The Roxx offers is scope to grow YMCA programmes particularly with the addition of the Clip 'N Climb facilities.

Explaining the acquisition, YMCA of Christchurch Chief Executive Josie Ogden-Schroeder stated "we will continue to offer a range of programmes which compliment the indoor climbing activities such as outdoor climbing trips, kayaking and tramping adventures."

Schroeder is excited about the opportunity to increase the YMCAs community relevance and reach. As a charitable trust, under YMCA ownership The Roxx will operate as a social enterprise meaning that all proceeds will be invested back into YMCA community programmes.

The YMCA is very grateful for the financial support they have received from the Canterbury Community Trust which improves the overall business case for the purchase.

Schroeder adds "climbers should be assured that while this is a change, the spirit of the arrangement is about making climbing more accessible and better than ever for Cantabrians."

It is intended that the YMCA will continue to employ the majority of Roxx staff when they take over. The expected date for this will be in March 2014 when earthquake related damage has been repaired.

The YMCA is currently exploring options for their climbing facilities located on Hereford Street.

For more information go to www.ymcachch.org.nz/

29th July 2011 - YMCA OF CHRISTCHURCH TO REOPEN AFTER FEBRUARY EARTHQUAKE