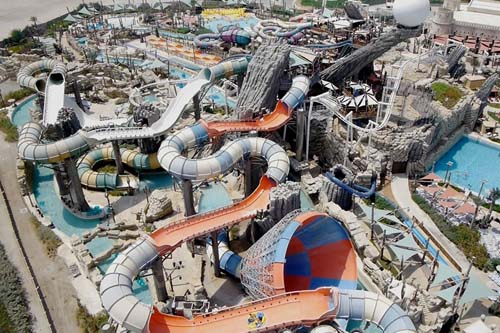 Receiving the award Park General Manager Mike Oswald stated "when we launched the waterpark, our goal was to deliver an out-of-this-world experience to our guests and to receive this award just a few short months since starting our operations is a sign that we have been successful.

"This award is doubly satisfying as it is a vote of confidence from both consumers and our peers in the industry so it's great to see that we have got the formula right straight off the bat."

The mega waterpark beat some of the region's best known attractions including Dubai's BurjKhalifa, Ski Dubai and other waterparks such as Aquaventure, Atlantis The Palm and Wild Wadi, among others, to take home the prestigious prize.

Celebrating its 20th anniversary this year, the WTA serve to acknowledge, reward and celebrate excellence across all sectors of the global travel and tourism industry.

The WTA brand is recognised globally as the ultimate hallmark of quality, with winners setting the benchmark to which all others aspire. Each year WTA travels the globe with a series of regional gala ceremonies staged to recognise and celebrate individual and collective successes within each key geographical region.

The regional winners compete head to head in a final round of voting to decide who will triumph in WTA's world awards the ultimate accolade in the travel and tourism industry.

The WTA Grand Final 2013 will take place in Las Vegas later this year.

For more information go to www.yaswaterworld.com