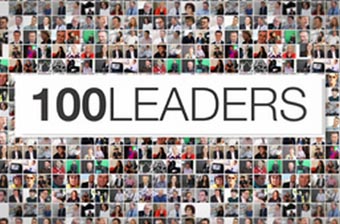 XVenture, specialists in cutting-edge learning solutions for business and leadership, have digitally launched their unique 100 Leaders program, the largest of its kind ever created globally.

The innovative program features interviews with 100 leaders from extremely diverse backgrounds, sharing their views and philosophy in short clips supported by animation, music and imagery, to deliver an inspirational commentary on modern leadership.

The 100 Leaders project is the latest initiative from XVenture, who rose to prominence with the landmark XVenture Corporate Challenge TV series on Channel One and Sky Business three years ago. Since then, XVenture has delivered Challenges and experiences to leading organisations in Australia and overseas.

The ground-breaking 100 Leaders program is hosted on XVenture's own digital business channel XV141 and accessible on its website, with each rented clip benefiting participating charities.

Over an 18-month period, XVenture interviewed and recorded 100 people for the project from small, medium and large organizations around the world. Doctors, dancers, designers, educators, entrepreneurs, artists and musicians, business executives, financiers, manufacturers, technologists, charity leaders and sports people have all participated.

The 100 Leaders project is self-funded by the XVenture team led by Founder and Chief Executive Mike Conway, who is also an Adjunct Professor at Macquarie Graduate School of Management, Australia's top-ranked MBA school.

Commenting on the initiative, Conway stated “a couple of years ago I was encouraged to write a diploma in leadership to support our XVenture Challenge programs.

“I soon realised that I couldn't be so arrogant as to come up with a single model of leadership.

"So I thought the best thing I could do was talk to those who actually do it. From this it became obvious that leadership is a personal thing and there are many models that work depending on the circumstances."

XVenture has now produced these 100 interviews into short clips, supported by animation, music and imagery to deliver some of the most inspiring contemporary thoughts and views on leadership ever seen.

Conway adds “whilst we have interviewed some very high-profile and amazing people including Steve Waugh, Laura Geitz and Ronni Kahn, every person we've met has had an ncredible story and wisdom to share.”

One of the participants is Audette Exel, founder of the Adara Group, who comments “it's so beautifully done, clever and inspirational. It is such a unique way of sharing knowledge."

Another participant is Luke Mackey, General Manager, Operations at Event Cinemas, who has viewed the clips on the big screen.

Mackay adds “this is some of the best alternative content I have seen, produced at such high-quality it looks great on mobile, tablet or desktop.

“But it really comes to life on our biggest Vmax screen."

Profits are shared 'one for one' with several charities who have been part of the program, including the Steve Waugh Foundation, OzHarvest, Don Spencer's Australian Children's Music Foundation, ADARA Group, the National Centre for Indigenous Excellence, and Amnesty."

Ludwina Dautovic of Spondo, an expert in digital media based in Melbourne, added "XVenture are taking a leadership position not only in the quality and delivery of content but also in their shared value-pricing model.”

XVenture will be working with Event Cinemas to deliver this outstanding video program via the big screen. Organisations will be able to experience the program in the coming months.

The leadership clips can be rented and watched now at www.100leaders.com.au or www.facebook.com/100leaders.

A sample of one of the clips, with insights on the leadership theme of "Belief", can be watched at www.xventure.com.au/digital. It features Steve Waugh, Ronni Kahn, Chris Adams, Michael Sugg, Greg Oliver, Terry McFlynn, Laura Geitz, Leanne Campbell, Ryan D'Almeida, Winnie Lam and Michael Sugg.

XVenture designs and delivers customised solutions for business, leadership, team and experiential learning programs, with a flair for the innovation that made its XVenture Corporate Challenge a landmark television series.

For more information go to www.XVenture.com.au