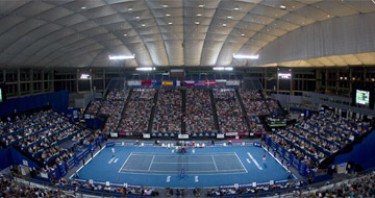 Perth will play host to some of the world's best tennis players when the Hyundai Hopman Cup XXIII begins at the Burswood Dome tomorrow (1st January).

Western Australian Tourism Minister Kim Hames said the 2011 tournament had one of the strongest Hopman Cup fields ever assembled, including many top ranked players, which reaffirmed the event as one of the most important on Australia's tennis calendar.

Dr Hames explained "tennis fans will see some of the world's best, including Novak Djokovic, Andy Murray, Francesca Schiavone and Justine Henin, in action over the next eight days.

"The State Government has committed additional funding to the Hopman Cup to secure the event in Perth through to 2014 via a new four-year agreement between Tourism WA and the International Tennis Federation.

"This support will further cement the tournament as the strongest lead-in event in the world for the Australian Open and deliver increased visitation to the State.

"It is fitting that such a strong field will mark the beginning of a new broadcast partnership with Network Ten and ONE HD, which will televise the championships across Australia and into more than 90 countries worldwide."

He added that "the State Government recognises the importance of staging world-class sporting events to boost visitation to the State and to promote Western Australia to the rest of the world.

"Eventscorp has played a crucial role in securing the event for Perth and the additional funding allocated will continue to help the Hyundai Hopman Cup break new ground."

The tournament starts at 3pm tomorrow with Australians Alicia Molik and Lleyton Hewitt taking on the third-seeded Belgian's Justine Henin and Ruben Bemelmans.

Image: The Burswood Dome, home of the Hopman Cup.