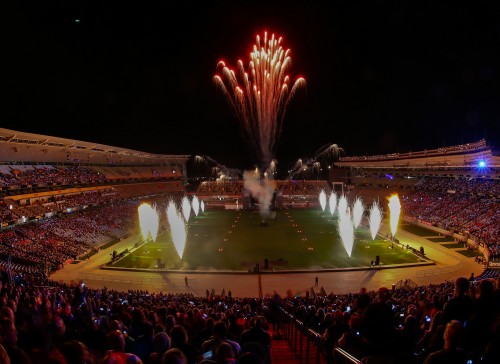 The largest multiple-sport event in the world has officially kicked off in Auckland with an innovative light show during the World Masters Games 2017 Opening Ceremony at Eden Park last night.

Auckland offered a spectacular welcome to the more than 28,000 participants from around New Zealand and across the globe, who are in the city to compete in 28 sports at 48 World Masters Games 2017 (WMG2017) venues for the next 10 days.

The country’s pre-eminent event producer, Mike Mizrahi, was the creative visionary behind the WMG2017 Opening Ceremony.

A spectacular laser light - the largest ever seen in New Zealand - dazzled the crowd as part of a ceremony which celebrated the unique culture of New Zealand and the spirit of the WMG2017.

The event combined cutting-edge technology with performances, a tribute to the 28 Games sports, and the celebratory athletes’ march.

WMG2017 Chief Executive Jennah Wootten says the event has been four years in the planning with the aim of delivering the best World Masters Games in history.

She explained “one of the unique attractions of World Masters Games is the social side of the event, and there is a great history of lifelong friendships being formed at previous Games.

“As the host city in 2017, Auckland is embracing that tradition and laying on a feast of culture, performance, music and food on our waterfront.”

Auckland Tourism, Events and Economic Development (ATEED) bid to host WMG2017 in partnership with the New Zealand Government, and is delivering the event through a separate subsidiary company.

ATEED Chief Executive Brett O’Riley says WMG2017 will be the largest participation sports event New Zealand will host in the next decade.

O’Riley stated “hosting major events helps showcase Auckland to the world, giving people a reason to visit, to stay longer and to experience more of what we have to offer. Its long-term legacy is a significant boost to our sporting organisations, local businesses and regional amenities.

“As we’ve seen in the past from hosting events such as Rugby World Cup 2011, ICC Cricket World Cup 2015, and FIFA Under-20 World Cup, they are a catalyst for the development of infrastructure, they attract investment and new skilled migrants, and add to the vibrancy and excitement of Auckland for residents and visitors.”