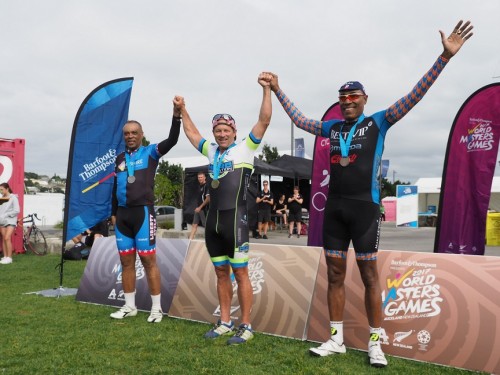 In a final announcement prior to the wind-up of the Local Organising Committee, WMG2017 Chairman Sir John Wells stated “it is a very satisfactory result and conclusion to the World Masters Games in April, which exceeded all economic and social goals and expectations.”

The ninth edition of the World Masters Games in Auckland, New Zealand, was declared the ‘best ever’ by the rights holder, the International Masters Games Association, a sentiment reflected by post-event analysis.

Sir John added “it was an outstanding World Masters Games experience for the 28,578 participants involved and proved once again that New Zealand can deliver a complex major event with imagination and operational excellence.

“We were well served by our executive team led very capably by Chief Executive Jennah Wootten.

“When delivering an event of the complexity of WMG2017, it is necessary to reserve a Games-time contingency to cater to any situation or eventuality. As it happens we experienced virtually no issues at all.”

Chief Executive Jennah Wootten said the surplus would be used to establish a fund for the purpose of benefitting amateur sports events and initiatives across the 28 sports involved in the Games. The fund, accessible by grant application, is to be administered by WMG2017 shareholder Auckland Tourism, Events and Economic Development (ATEED). The fund criteria and process for applications are being developed and the 28 Games sports will be advised of this detail in due course.

Wooten explained “we’re absolutely thrilled to give something back to the organisations that supported us in delivering such a flawless Games. It’s fitting that we can help enable ongoing participation in amateur sport in Auckland and New Zealand as a legacy of hosting WMG2017.”

Just release post-event research** shows the Games exceeded all targeted economic and social KPIs. The Games drew in $34.2 million incremental GDP and 241,480 visitor nights for Auckland against the targets of $30.8 million GDP and 224,000 visitor nights.

At a nationwide level it achieved $63 million incremental GDP and 302,509 visitor nights for New Zealand against the targets of $52.3 million GDP and 266,190 visitor nights respectively.

Participant satisfaction with the event was another important goal. In this respect WMG2017 scored a big tick from athletes and supporters with 89% agreeing they were well organised. 91% of Auckland residents said the event enhanced their pride in the city. The target in both cases was 85%.

WMG2017 delivered 28 sports (including 45 disciplines) across 48 venues over a 10-day period in April, and was an event that captivated Auckland and New Zealand for its short duration.

The next World Masters Games take place in Kansai, Japan from 15th to 30th May 2021.

**Research carried out by the Fresh Information Company - 3,974 WMG2017 participants (including athletes, non-playing officials, registered supporters and volunteers) completed an online post-event survey over the period 5th to 12th May 2017.