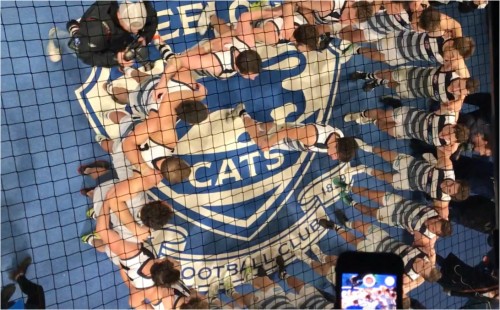 The lead advisor behind Simonds Stadium’s new Charles Brownlow Stand, Waypoint Managing Director Chris Dare, says the value of the 16 year development journey was confirmed by Geelong’s courageous win over the Western Bulldogs in the AFL Premiership on the day of the Stand’s official launch.

The Cats’ vision to redevelop Kardinia Park’s former Brownlow and Jennings stands began with a masterplan way back in 2000 and has since seen over $200 million in funding invested across four stages of development.

The master planning of each stage involved a lot of research to bring innovative ideas from sports facilities around the globe, and as Dare explains “the idea and strategy behind the fan portal is to add wow factor for fans and sponsors, by bringing them closer to the action with a unique, inner sanctum experience.”

AFL leaders including Chief Executive Gillon McLachlan toured the new grandstand just prior to its opening and were more than impressed with the manner in which the facility had opened its ‘heart’ to the fans, through the development of features such as the fan portal, skylights and public cafe.

While the corporate patrons were networking in the 12 new corporate boxes and the 600 seat President’s Club, social club members are also enjoying their new 2,000 capacity area, complete with bars that overlook not only the playing arena but also the adjacent parklands.

Cats players are quickly getting used to state-of-the-art training, recovery and rehabilitation facilities. Comprising spaces for aquatic recovery, massage and rehabilitation, sports psychology, education, and strength and conditioning, the facilities have drawn upon Waypoint’s learnings identified from research tours to other highly successful organisations, and are heavily centred around optimising player learning, performance and well-being.

Dare commented “it is really important to the Cats that they look after player personnel both physically and mentally.

“The psychology behind the new high performance training facility is very deliberate. It’s not all about turning up and pushing weights or jumping in the plunge pool.

“The Cats want to be at the top of their game and this begins with the environment that is created for learning and training.” 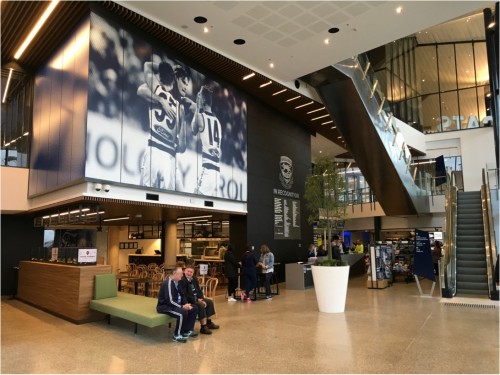 Cats Chief Executive Brian Cook is so impressed with the club’s new facilities that he believes “there is no doubt that the new training facilities will be a big factor in attracting and retaining the very best players in the country.”

The unsung administrative heroes of sport have not been overlooked.

Dare added “the Club asked us to create a collaborative work environment, and the feedback has been that the facilities have already made a positive difference even after just one week of operation.

“Clubs fall down quickly if management and administration is below par or disconnected from the playing group.

Waypoint are proud to have lead the large team that have put so much hard work into turning the club’s vision into a reality. The redevelopment has great significance to the whole region, and the increased crowd capacity means Simonds Stadium can lure a diversity of events of national and international significance including A-League, international cricket and T20 Big Bash.

Complimenting this is the the Sunrise Centre, a community facility within the grandstand which has been established to rehabilitate and assist people as they return to the workforce following serious injury.

Waypoint’s involvement in the Simonds Stadium redevelopment spans all four stages since 2000, and will continue for the foreseeable future with the company being appointed to lead and develop the business case and funding strategy for the final stage of the stadium’s transformation, which is hoped to be completed by 2020.