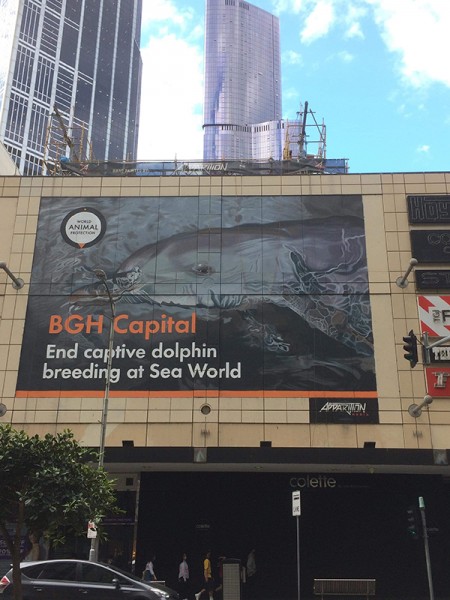 With the private equity group currently bidding to purchase Village Roadshow Limited, World Animal Protection had sought to highlight its campaign targeting the breeding of dolphins at the Village Roadshow owned Sea World by having the billboard erected in Melbourne’s Lonsdale Street.

World Animal Protection presumably sought to either discourage BGH’s bid or to have the private equity venture change practices if it is successful.

Following the removal of the billboard, World Animal Protection released a statement in which it made allegations relating to the reasons for it being taken down. The statement advised "after only four days of display, Village contacted the outdoor advertiser, threatening to withdraw future advertising spend if they did not remove World Animal Protection’s mural immediately."

The non-for-profit organisation is reported to have paid $18,000 outdoor advertising agency Apparition for the billboard to be displayed until 30th November.

Village Roadshow is sensitive to any form of perceived criticism of its the care of its marine attractions at Sea World, with the company's management currently opposing BGH Capital’s takeover.

A final shareholder vote on the takeover bid will take place at the end of this month.

Sea World’s dolphins are one of its best known and oldest features while, behind the scenes, the theme park is responsible for major conservation projects involving dolphins and marine mammals. The Sea World rescue team, which collaborates with the Queensland Parks and Wildlife Service and Queensland Boating and Fisheries Patrol, undertakes the rescue of stranded and entrapped marine animals - including dolphins, turtles, whales and penguins - and has been called upon numerous times by governments and authorities to assist with marine animal strandings, frequently then embarking on the rehabilitation of these animals if they are injured.

Image: World Animal Protection's billboard on Melbourne’s Lonsdale Street prior to its removal.