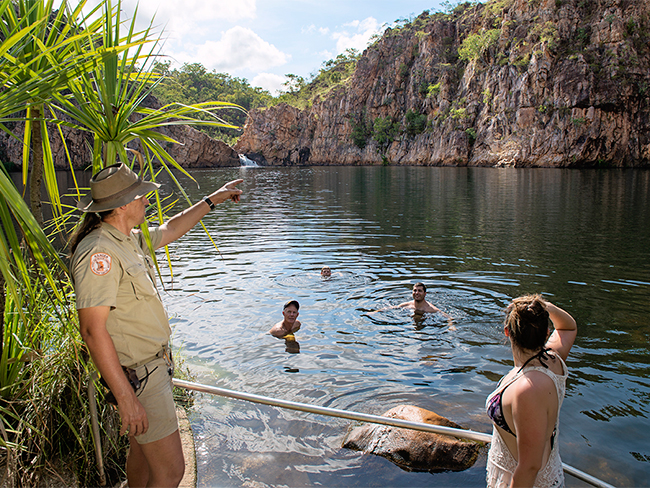 Three projects are now underway in the Northern Territory Nitmiluk National Park including new mountain bike trails and visitor centre upgrades. The $5.5 million Turbocharging Tourism investment in the national park is in addition to the Government’s $10 million infrastructure investment in the Park.

As part of the State Government’s wider NT Mountain Bike Master Plan to establish the NT as the adventure riding capital of Australia, construction on new mountain bike hub shelters and mountain bike trails has begun in the Park.

Works at the Baruwei Lookout are also underway with the construction of new stairs crafted from natural rock carried out by local contractors, Katherine Constructions Pty Ltd.

The Lookout will then be expanded to accommodate more people and a new platform will be constructed at the halfway point on the stairs.

This includes the visitor centre upgrade, improvements to the steps between the first and second gorge, a new causeway over the Katherine River, and a new jetty, due for completion in coming weeks.

NT Acting Minister for Tourism, Sport and Culture, Eva Lawler notes "Tourism is a key economic driver in the Territory, and our national parks are one of the main reasons people visit. Investing in our parks is not only an investment in our tourism sector but also in the liveability of the Territory – Territorians love our parks just as much as visitors from interstate and overseas do.

“Mountain biking and adventure tourism are growing in popularity, and improvements to trails in the Territory will help put us on the map for people looking for such experiences.”

Member for Arnhem, Selena Uibo added “by improving facilities, infrastructure, and tourism offerings in our national parks we are providing more reasons for people to visit, and more reasons for them to stay longer.

“Mountain biking is an increasingly popular recreational activity and visitor attraction, and the upgrades to the Baruwei Lookout will give visitors an enhanced view of the Katherine River and its unique escarpments.”