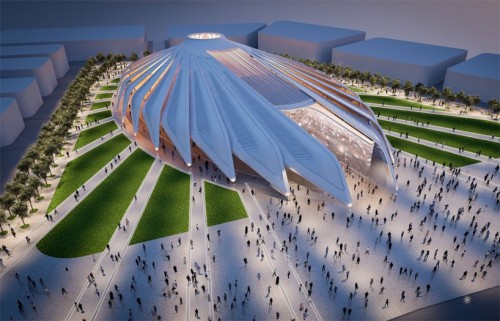 The foundations have been laid for the showpiece United Arab Emirates Pavilion for the Dubai World Expo in 2020.

Located in the centre of Dubai’s 200-hectare exhibition zone, the pavilion will be spread across an area of more than 15,000 metre² with a top floor will be dedicated to hospitality, a mezzanine floor will house support units and the two remaining levels offering more than 12,000 metre² of exhibition space.

Being built by national firm Arabtec Construction, which recently delivered the Louvre Abu Dhabi museum, the entire structure is expected to be completed by the end of 2019.

Designed by architect Santiago Calatrava’s the four-storey structure will represent the UAE to the 25 million visitors expected to attend the architecture festival, which is themed ‘Connecting Minds, Creating the Future’.

Displays will showcase the country’s culture, history and development plans.

Calatrava won the project last year after being selected ahead of eight other firms in a seven-month international design competition. He took inspiration from the falconry expeditions said to be held by the UAE’s founder, Sheikh Zayed bin Sultan Al Nahyan, to forge connections between tribes and create the national identity which ultimately led to the founding of the country.

Speaking after helping to break ground on the project, the Expo 2020 Dubai Committee Chair Sheikh Ahmed bin Saeed Al Maktoum, stated “the UAE Pavilion will undoubtedly be one of the most prominent attractions of Expo 2020, drawing in many millions to witness its futuristic design.

“It will be a wonderful opportunity to share our Emirati culture and achievements while showcasing our ambitious vision for the future. It will be an architectural marvel that all seven emirates can rightly take pride in, both now at the ground-breaking stage, during the Expo, and in legacy, when it will become a lasting icon of our nation.”