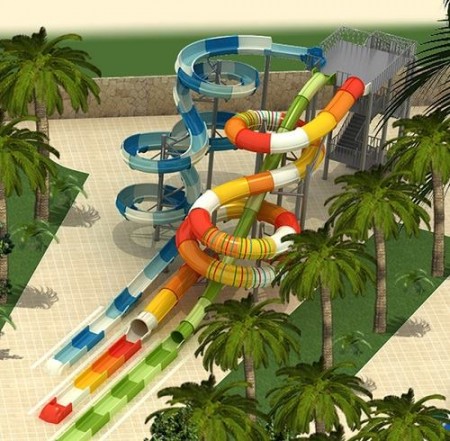 Following the success of aquatic play features introduced at the Fairfield Leisure Centre in 2009, the new waterpark at the Prairiewood will be considerably larger, featuring a a giant water slide tower incorporating three impressive slides along with an aquatic playground, interactive splashpad and a Stingray surfing/skim boarding half pipe simulator.

Suitable for all ages, the Polin Waterparks AquaTower B09 will offer eight platforms to explore and 79 interactive play features, surrounded by protective soft fall surface.

The slides will be 10 metres high with the longest running for 83 metres. They include a tunnel freefall slide for thrill seekers, a twisting tunnel slide and an open meandering slide.

A compact slide will be a more gentle ride for the younger users, an enclosed Tunnel freefall will be the fastest way from the top to the bottom short of bungy jumping while an enclosed Tunnel Bodyslide completes the set with a fast slide to offer thrills to the people of Fairfield.

The tower is at 10 metres and is also being produced by Polin.

For younger visitors, a Waterplay splash pad will features a selection of above ground water features with an interactive control system.

In a recent announcement to the community, Mayor of Fairfield City Frank Carbone said that he is looking forward to the opening of the park that will allow local families an affordable option for water parks.

The waterpark is expected to be completed by the end of the year in time for the 2016/17 summer.

Image shows a CAD of the new waterpark. Courtesy Facebook.