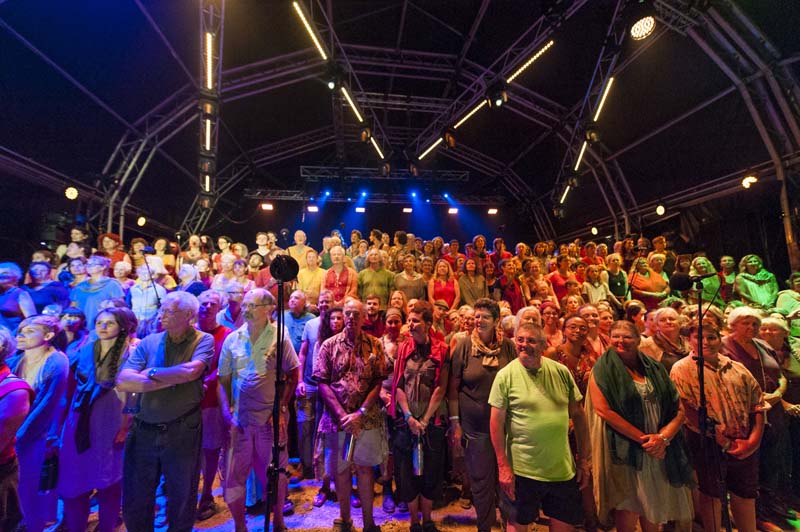 With more than 400 acts showcasing across 25 venues during 6 days of the annual Woodford Folk Festival, this year's 31st edition has achieved record early bird ticket sales.

Speaking at the recent  launch event, Festival General Manager Amanda Jackes explained that ticket sales were 10% ahead of last year, advising “our history has shown that ticket pre-sales can be volatile and don’t always reflect what happens on the day, but it has to be a good sign for us."

Those venturing to the Woodfordia parkland north of Brisbane will be treated to genre-crossing music performances including blues, folk and rock, world and indigenous, right through to dance, circus, spoken word, comedy, a series of pertinent conversations in the speaker’s program and a full-to-the-brim Children’s Festival.

Festival Head of Programming, Chloe Goodyear explains “there are so many performers we’ve been having conversations with over many years from Australia and across the world, this is both a year of firsts along with a year of great past-performers returning.

"We are pretty sure there are going to be some delighted supporters and as always, an abundance of new discoveries."

Festival Director Bill Hauritz sees that the artists that are set to perform are a conduit to an appreciation of the human experience. “Without artists we might as well be living on the surface of the moon, devoid of the air to breathe… they provide inspiration, beauty, thoughtfulness and commentary on our lives and their influence on our culture is profound."

Woodford Folk Festival is Australia’s largest annual not-for-profit arts and music festival of its kind, gathering together more than 2000 artists, musicians and presenters in more than 400 acts, across 25 venues to an est. audience of 120,000 people.

​After a dedicated year of redesigning the organisation from its original structure of a regional folk club, Queensland Folk Federation, the producers of Woodford Folk Festival and The Planting have reformed as Woodfordia Inc., an organisation dedicated to the 500 acre property that hosts the festivals in Queensland.

Having retained and expanded community roots, they have created a not-for-profit organisation with a membership structure open to the Australian and International public.

The Woodford festival experience is deep, rich and colourful based on the vision of an inclusive and creative community, which fosters the growth of cultures and traditions through generations and is expressed through story and ceremony.

This is exemplified by the large-scale spectacle theatre at the Welcome Ceremony, and the Festival’s flagship closing ceremony, The Fire Event.

The Festival’s home, Woodfordia, is a one hour drive north-west of Brisbane. The 500 acre property has been developed into a cultural parkland dedicated to the arts, humanities and lore.

Woodfordia has infrastructure to accommodate a live-in population of 25,000 people and has been lovingly regenerated with over 100,000 subtropical rainforest trees, orchids, ferns and sedges planted to create habitat for butterflies and wildlife. As many as 2700 volunteers across 140 departments are at the heart of the organization and contribute to the setup and day-to-day running of the festival.