Women’s game seen as a key driver of football 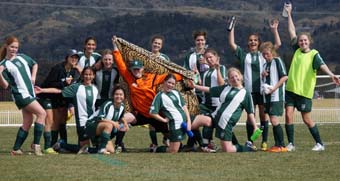 The growth potential of women's football in Australia was the central topic when officials from AFC and UEFA met with an FFA delegation in Sydney this week.

Australia is ranked ninth in the world for women's football, has over 100,000 registered female participants and has just finished another hugely successful Westfield W-League season.

Women's football is seen as a key driver in the overall growth of the game in this country. Some obvious yet crucial ingredients in the growth of the women's game include Australia's 50% female population a largely untapped market in Australian sport, a female Prime Minister and Sports Minister who have women's sport firmly on the national agenda, a prominent broadcaster and five years of serious investment in the Westfield W-League.

Dodd, a former Matildas Vice-captain and now FFA Director, has seen the game already take massive strides in Australia and sees great potential in the women's game in this country.

"With a joint effort by FFA and the AFC, and expertise from UEFA, there is a strong belief that Australia can provide a best practise model, which can lead the way in the development of Women's Football in Asia.

"We have made great progress in five seasons of the Westfield W-League to date, we're now operationally strong and technically improving rapidly as we saw in last month's spectacular finals series.

"In the next five years our aim is to unlock some of the dormant fan and commercial potential of elite women's football in Australia. Our challenge is to be a world leader in women's football by being among the first to operate a genuinely professional league for players and coaches."