Without volunteers agricultural shows ‘will cease to exist’ 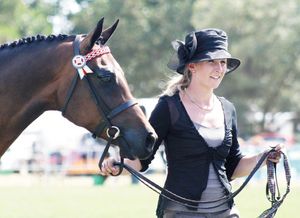 Australia's 587 agricultural shows collectively attract more than 5.9 million people a year and deliver an economic impact of at least $965 million per annum according to a new study.

Released during the Brisbane Ekka, the Queensland Chamber of Agricultural Societies Inc (QCAS) study suggests that while visitor numbers to Queensland's agricultural shows have increased by 13.7% over the past three years, overall visitor numbers and the show movement in general are in decline with fewer shows operating and fewer people attending shows than 12 years ago.

QCAS Chief Executive Mark Bryant explains "we are very happy that so many people attend their local show, but we want to increase the visitor numbers in both rural and city areas."

In commissioning the study QCAS set out to identify and measure the economic and social impact of Australian agricultural shows with the aim of providing valuable information to those who support the show movement through participation, sponsorship and volunteerism.

Based on document analysis and feedback from 1,900 people, the results present governments and community stakeholders with a clearer understanding of how the show movement plays an important role in increasing social capital and economic development.

The report explains "agricultural shows have been part of the Australian culture since 1822 and are strongly connected to local communities through volunteerism and the educational, competitive and cultural experiences they provide."

Among other key findings, the report highlights:

• The value of show volunteers in Queensland is estimated at $84 million;

• Sponsors and exhibitors support an agricultural show for a variety of reasons - 76% said their expectations had been met. The most commonly cited reason for their support and participation is to promote and advertise their business or product.

The report also suggests that to increase the impact of agricultural shows, show societies need advice, training and support in the areas of:

To reverse the decline in show numbers and overall attendance, the report suggests that "show societies may need to establish new and improved ways of attracting and engaging visitors and sponsors, marketing, fundraising, and conducting research."

It also highlights the importance of recruiting, supporting and retaining volunteers and that "without them the show movement will definitely cease to exist."

It continues "show societies need to review their volunteer recruitment strategies and engage younger people with a broad skill base if they are to once again become the 'must-see' cultural and recreational event of the year."

Bryant concludes "this research has helped us identify what we need to do to recruit more volunteers, competitors and sponsors. Without these supporters, agricultural shows could cease to exist."