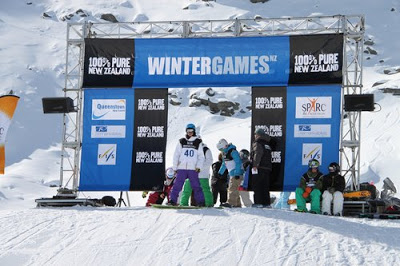 The 2013 Winter Games NZ are set to achieve an unprecedented level of international television and internet coverage as a result of a ground breaking marketing partnership.

For the first time, Winter Games NZ will work with IMG Media, part of IMG Worldwide, the world's leading sports, fashion and media company, to secure coverage across both the traditional broadcast and digital platforms.

With the event set to feature the world's top winter sport athletes, including New Zealand Olympic gold hopeful Jossi Wells, the resulting TV coverage will be delivered to a minimum of 25 targeted countries in the form of fourteen daily 22-minute highlight shows, one 52-minute official film and daily video news releases resulting in an audience reach in excess of 1 billion homes.

Positioned as one of the top five winter sports events in the world, Winter Games NZ will feature the world's elite snow sports athletes as they prepare for the 2014 Winter Olympics in Sochi, Russia. With five FIS World Cup and three IPC World Cup events, Winter Games NZ will play an important role in the Olympic and Paralympic qualification process, making or breaking the dreams of many. The world class action will provide compelling sports programming against the spectacular backdrop of New Zealand's Southern Alps, showcasing the country as one of the world's leading snow sports destinations.

"The partnership between Winter Games NZ and IMG will ensure our emerging talent, our world class athletes, our events hosting capabilities and New Zealand's amazing facilities are showcased around the globe. Snow Sports NZ looks forward to capitalising on the increased profile and opportunities that come about as a result of this partnership."

IMG Senior Vice President and Head of IMG Media, Asia Pacific Chris Guinness added "we are delighted to be working alongside the Winter Games NZ to assist them with growing exposure and developing the profile of the event through international TV distribution and digital media syndication.

"The Winter Games NZ is the premier event in New Zealand and one of the top five snow multi-sports events in the world. IMG will utilise our worldwide international sales team in sixty offices in thirty countries around the world to ensure that event highlights are seen in as many countries as possible."

Bates explains "for 15 days in August, New Zealand is in the spotlight for snow-sport lovers and their family and friends, world-wide. The participation of international sports stars and the presence of international media provide a fantastic opportunity to showcase to the world that New Zealand is the ultimate winter holiday destination for everyone - whether you are looking for action on the slopes, or if you prefer to observe the games while relaxing in stunning surroundings.

"Tourism New Zealand will work alongside the games organisers to maximise the media profile achieved over the course of the games and encourage others to share their Winter Games' stories through social media a channel that has become so powerful in promoting a destination to others."
Winter Games NZ Chief Executive Arthur Klap said the partnership was indicative of the standard Winter Games had reached.

Klap concluded "few events get the opportunity to partner with organisations such as IMG as they demand that the product is world class if they are to have any success in distributing the television product. We know how magnificent New Zeal

For more information go to www.wintergamesnz.com