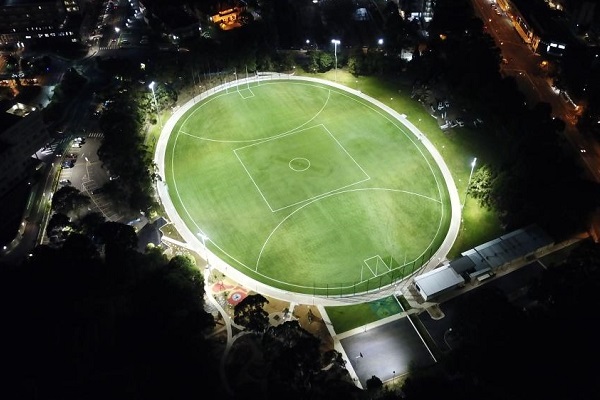 Up to 3000 people a week are expected to use the new $10.5 million Gore Hill Park sports and community facilities following its official opening last weekend.

Commenting on the facility, Willoughby Mayor Gail Giles-Gidney said she was thrilled the project provided versatility and upgraded facilities, advising “the new offerings such as the playground, perimeter path, outdoor gym, half basketball court and handball courts ensure more people can use the space more often.

The new synthetic surface will increase the playable hours as the field will not require ‘rest days’ that natural turf does and games can continue even in wet weather. Previously used by cricket and AFL teams, the field will now welcome football as well while a new air conditioned function room will be available for hire.

The 4.4 hectare site at the corner of Reserve Road and Pacific Highway, St Leonards, has been used as a sporting field for over 90 years.

The project is part of the Gore Hill Park Redevelopment and will eventually host a sports complex with underground parking, providing a range of active and recreational opportunities for local residents, workers, visitors to the hospital and the wider community.

Designed by Tract Consultants, landscape construction firm Glascott undertook the re-orientation and resurfacing of the oval for improved capacity and the upgrading the regional playground.

The $10.5 million project was approved by the Council in August 2016, with construction starting in November 2017. It was funded $9.5 million by the Australian Government and $1 million from Council.

Click here for information on Glascott's role in the project.