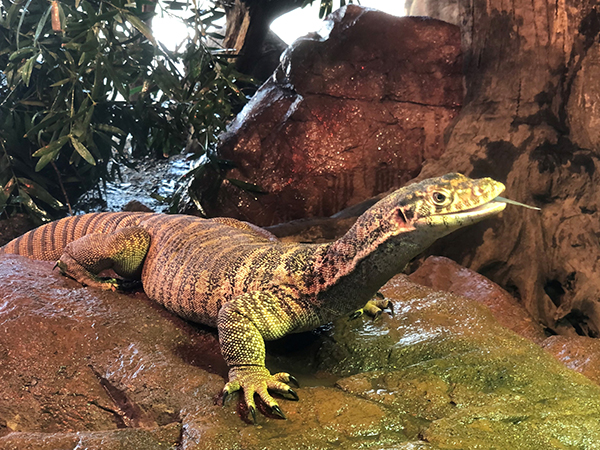 WILD LIFE Sydney Zoo is today celebrating World Lizard day (14th August) by spotlighting its intelligent lizards, in particular, the Spencer’s Monitor Lizard - considered to be one of the most intelligent reptiles in the world - rivalling the intelligence of some birds and even mammals.

The Spencer’s Monitor Lizard has been known to count snails during feeding time, remember hiding places and can travel long distances and still find their way back home, thanks to their excellent memory.

To celebrate World Lizard Day, the Keepers at WILD LIFE Sydney Zoo are sharing the training progress of Stefan, their four-year-old, male Spencer’s Monitor, who lives up to the ‘intelligent’ reputation that these lizards have earned.

“We have been training Stefan for almost a year and in that time, he has quickly learnt to independently step onto the scales or to a station, which helps us monitor his growth and health. Stefan is also being pet pack trained and tactile conditioned – which means that he’s very comfortable interacting with humans and will voluntarily come forward for medical checks, enabling us to closely monitor his overall well-being.

“We train Stefan using positive reinforcement, we use a clicker to teach him the desired behaviour and he has quickly learnt that every time he hears the click a food reward is on its way!”

Facts about lizards and Spencer’s Monitors: