As the resources boom grinds to a halt, there has been a lot of doom and gloom surrounding the impact on Australia’s economy. But, while the rapid growth of the resources sector has undoubtedly contributed to the country’s economic growth over the last 10 years, there’s reason to believe the impact of its decline won’t be as devastating as some have predicted.

That’s because waiting in the wings is Australia’s tourism industry, which looks set to replace mining as the nation’s biggest export.

The recent figures from Tourism Australia are impressive – international visitors to Australia spent a record-breaking $32.5 billion for the 12 months ending March 2015, an increase of 10% – or $2.9 billion – on the previous year.

The number of visitors has increased by 8% year-on-year to 6.5 million and visitors are staying for longer, with the number of nights spent here up 7% to 231 million.

As Australians fret about the fluctuations in China’s stock market and its potential impact on the economy, Chinese tourists are flocking to Australian shores in droves, leading the growth in tourism numbers.

China is now Australia’s number one inbound market and in order to capitalise on the increasing number of guests looking for accommodation across Australia, hoteliers must maximise innovative technologies, such as SiteMinder’s Channel Manager, that is widely available to them. As last week’s SiteMinder blog on the spending power of Chinese millennials demonstrated, having a seamless connection to regional OTAs such as Ctrip is even more crucial than ever before for hotels looking to attract, reach and convert guests from this lucrative market.

Looking at the total expenditure made by foreign visitors travelling to Australia, China’s contribution has increased from $1.5 billion in 2006 to $6.4 billion in 2015 – an increase of 20% in less than 10 years.

The growth of the Chinese economy over those 10 years is the driving force behind the increase, creating a larger middle class with money to spend on overseas trips. But the opening of new direct airline routes between China and Australia, and investment in major sporting events have also helped to secure Australia’s place on the travel itinerary. In the past 12 months, Chinese visitors were attracted by the Chinese New Year celebrations and two major international sporting events – the 2015 AFC Asian Cup and the 2015 ICC Cricket World Cup.

Hotels benefitted from the influx of visitors, both domestic and international, with Melbourne hotel occupancy up almost 20%, and weekend room shortages reported across the host destinations. Quality technology, such as a channel manager, is imperative during these spikes in demand, as savvy hoteliers can strategically price their rooms to maximise revenue, and also manage their property’s inventory effectively to reduce the risk of overbookings and a disjointed guest booking experience.

The 2015 ICC Cricket World Cup also attracted the largest number of Indian visitors ever to travel to Australia in a single month at 23,400. This is part of a longer-term growth trend that has seen visitors from India increase by 78% since 2010, second only to China with 137% growth for the same period. To put this into perspective, the increase for all other countries combined has been 16%. 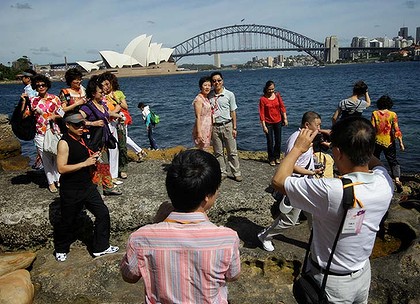 Interestingly, this exceptional year for tourism coincides with the timeframe of when Tourism Australia’s 2020 strategy was set to deliver impactful results from activity between 2012 and 2014 – including mass marketing in China and across Asia.

Tourism 2020 represents a ‘whole of government’ approach to addressing the barriers to industry growth and taking advantage of the opportunities presented by Asia. The aim of the strategy is to achieve the 2020 Tourism Industry Potential of increasing tourism’s contribution to GDP by as much as 50% to an estimated $51 billion by 2020.

Tourism 2020 has six strategic focus areas, the first of which is ‘grow demand from Asia’. Given the growth in Asian tourism over the last 12 months against a backdrop of stiff international competition, it seems that Tourism Australia’s approach is paying off.

However, before we lay our tributes at the feet of Tourism 2020, tourism’s bumper year has certainly had a helping hand from the drop in the Australian dollar, with visitors from the United States up 10% to 535,000, and corresponding spend up 14% to $2.9 billion. Even so, results from the UK remain soft with visitors and spend remaining constant at 631,000 and $3.5 billion respectively.

What does this mean for the Australian economy?
According to the Australian Bureau of Statistics, the value of inbound tourism for May 2015 was up 11% on the previous year. Total tourism income for the year to the end of May 2015 stood at $17 billion, beating coal at $16.5 billion.

Davies explained "although exports of bulk commodities are still making the largest contribution to real gross domestic product growth, the steep decline in the price of iron ore and coal has seen these exports decline sharply as a share of nominal GDP. This means tourism has overtaken coal to become Australia’s second-largest export. Tourism may also soon overtake iron ore, Australia’s largest export, given we expect the price of iron ore to remain under pressure."

Australia, as it turns out, is not a one-trick pony – and the economy will continue to survive, and even thrive, following the eventual decline of the resources boom.

Hoteliers have good reason to be optimistic about Australia’s long-term appeal to international guests. Research from Deloitte has found that demand for hotel rooms across Australia is projected to grow at double the pace of supply over the next three years. And room rates and revenue per available room (RevPAR) are expected to grow 3.5% and 4.9% respectively, per year to the end of 2017 – proving that hotels across the country have a big part to play in Australia’s economic future.

The real question is, can future guests find and book your hotel from anywhere in the world?
Mike Kinloch, Director of Sales – Pacific, SiteMinder

SiteMinder is a leading cloud platform for hotels that attracts, reaches and converts guests.

Images: Hospitality at Perth's Domain Stadium (top) and Chinese tourists in Sydney (below).