White Night festival to return to Melbourne in 2016

Melbourne's popular dusk-to-dawn arts festival White Night  is to return in 2016, but the Victorian Government will not reveal the cost of hosting the event.

The spectacle, which runs from 7am to 7pm, attracted 1.3 million people over its first three years.

Announcing backing for the 106 event, which will be held on 20th February, Victorian Premier Daniel Andrews stated "I'm sure that 2016 will be bigger and better than White Night has ever been."

However, Premier Andrews refused to disclose the cost of the festival, but insisted it would be more no more than in previous years, explaining "we don't want to be telling Sydney or any other competitor how much they'd need to pay to pinch an event like White Night from us."

Melbourne is one of 23 cities, including Paris - the home of the original 'Nuit Blanche' - that stages the event.

The festival is famous for its laser light shows on landmark buildings, its bands and installations, and for throwing open the doors to institutions like the National Gallery of Victoria and the State Library of Victoria.

Melbourne's White Night contract expired after the last festival in February, when organisers expanded its footprint to ease overcrowding and long queues. 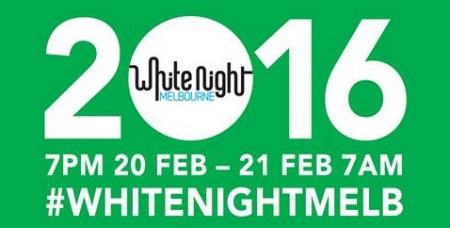 The festival generated $16.8 million for the Victorian economy this year.

Premier Andrews added that he hoped regional Victoria could get a taste of White Night in future, commenting "I think that there's an opportunity to take this beyond Melbourne.

"Whilst it won't be possible to take this event beyond the CBD or beyond the city of Melbourne next year, I'm very keen to make sure that White Night visits regional Victoria, whether that be in 2017 or at another point in the future."

Expressions of interest are now open for those who want to be involved in 2016.